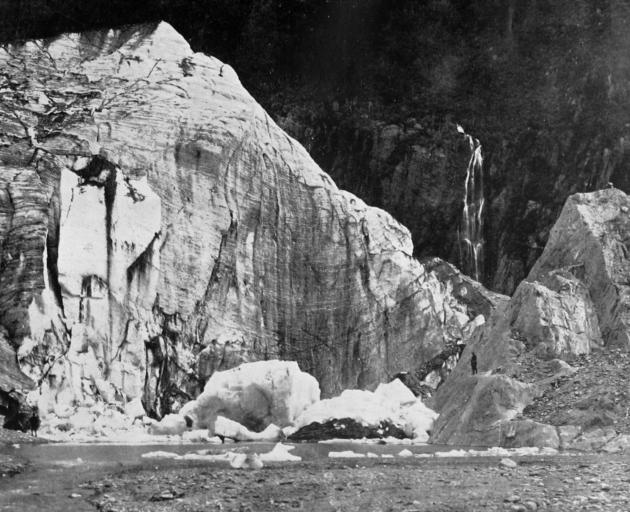 Ice cliffs, Franz Josef Glacier, South Westland. — Otago Witness,14.9.1920.
In these days when the University is being subjected to criticism, much of it adverse and anonymous, it is gratifying to draw attention to the fact that there are citizens who still have confidence in our educational institutions.

At a recent meeting of the University Council the foundation of the Edmond Scholarship in Chemistry was announced. The gift of £2000 by Mr Edmond will enable the Council to offer a scholarship of £200 per annum. It is now reported that the Knox College Council has received the gift of a Fellowship of £150 which will carry with it free quarters in Knox College. This gift must represent a capital value of something like £4000. In addition to the above two fellowships, the University received a short time ago a handsome gift to establish a lectureship in ethnology. New Zealand, within its own borders and by virtue of its situation in the Pacific offers special facilities for research in this important subject, and if this research is not made soon the opportunity may well be lost to the world forever. We understand that the University council will soon make an announcement concerning the Smeaton bequest. This bequest will enable the university to do something for science, perhaps for physics. We cannot conceive of any way of rendering service to our time and country more valuable than that of helping to make men and women by giving them a good education. The foundation of the above lectureship and
fellowships is an act of enlightened patriotism.

During the war over 270 of the employees of the firm of Messrs A and T Burt throughout New Zealand left the dominion to take part in the great struggle. The safe return of a large number of these to Dunedin was celebrated at a most enjoyable dance given by the firm in the Art Gallery Hall last night. There were nearly 500 present, including about 200 couples who took part in the dancing. The hall was very prettily and tastefully decorated, and rows of green and yellow lights gave a most pleasing effect. A striking feature was a cleverly constructed model aeroplane which swung in circles around the room, and served the additional purpose of an air fan.

Coal being replaced by oil

The introduction of oil fuel is being adopted by some of  New Zealand’s steamers, and the Niagara has run with this fuel for a long time (states the Marine Department’s report). Steam can be maintained with unvarying pressure all the time, and the crews are much reduced in numbers for the power developed, as the whole thing is automatic. The storage of oil in the tank  spaces formerly used for water ballast affords a considerable increase in the cargo carrying capacity of the steamer using fuel oil.

The following extract from a private letter received from an ex-Otago runholder in Scotland has been placed at our disposal: “I hope Sir J. Allen will wake up our people re frozen meat. The stuff the Government are letting the butchers have is quite unfit for human food, and bound to prejudice consumers. I see two butcher shops everyday on the way to my office and am shocked every day. Two or three years’ frozen meat is not nice to look at or to smell. It smells stuffy, and how anyone can face it is a wonder.’’ — ODT, 8.9.1920.