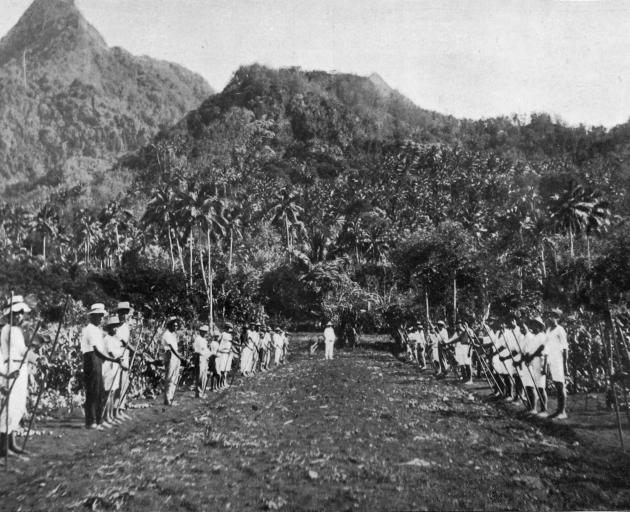 Samoan boys lined up ready for an agricultural class conducted by New Zealand teachers, Messrs Reid, Bannerman and Mills, at Rarotonga. — Otago Witness, 3.2.1920.
Earl Haig’s appeal in the British press on behalf of ex-soldiers who are unable to find work makes sad reading.

Many of these men will have sacrificed their prospects in civil life in order to serve their country, and it will be a lasting reflection on their country if their reward is to be unemployment and penury. To our shame, we may recall that the veterans of the Peninsular and Crimean campaigns were in too many instances allowed to pass their declining years in poverty and neglect.

Earl Haig asserts that thousands of officers possessed of brains and ability are tramping the streets, ragged in nerves, and with boots worn out, in the ceaseless search for work, while their wives and children starve and he describes how thirty-three thousand disabled soldiers have been left to maintain a stunted existence on an average pension of £70 per annum.

As the result of a public meeting held at Roxburgh recently the plant and water rights of the Ladysmith Gold Dredging Company have been secured for that district for the purpose of supplying electricity for all purposes. The purchase price was £1,510.

The water rights comprise some of the best rights in the Teviot Stream, and the race and plant are in first-class order.
An electrical engineer who inspected the property has reported that, without any material alteration to the plant as it is at present situated, 250 horse-power can be generated, and as less than half of this is required for household lighting and heating purposes, there is an abundance for other requirements.

Our correspondent at Roxburgh reports that a committee set up a week ago estimates that an immediate revenue of £1,500 is available, and if water can be pumped to a sufficient altitude, considerable revenue will be derived from its sale for irrigation purposes.

The value of fresh air cannot be over-emphasised at the present time. On such a day as yesterday, when summer was at the full height of its glory, and when all Nature beckoned one out into the open, the city playgrounds and beaches should have been crowded by those seeking to lay up a store of health against the day when they may have to contend against sickness
and physical weakness; but such was not the case.

The people at St Clair and St Kilda could have been counted by tens rather than by hundreds, and it was the same at the Gardens and the other breathing spaces of green grass with which the outer areas of the city abound.

The beneficial effects of a few days such as yesterday in retarding any extension of the present influenza outbreak are of inestimable value; but to turn them to the best advantage the people should get out into the open as often as possible, and stay there as long as possible.

For several weeks past a number of ‘‘right’’ whales have been cruising about in the vicinity of Centre Island, Foveaux Strait (says the Southland News).

As many as five have been seen on the surface at one time. The mild, warm weather is no doubt responsible for their reappearance in these waters. Whale feed and other small fish are also very plentiful in the Strait. 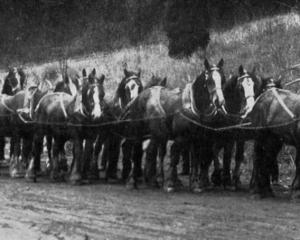