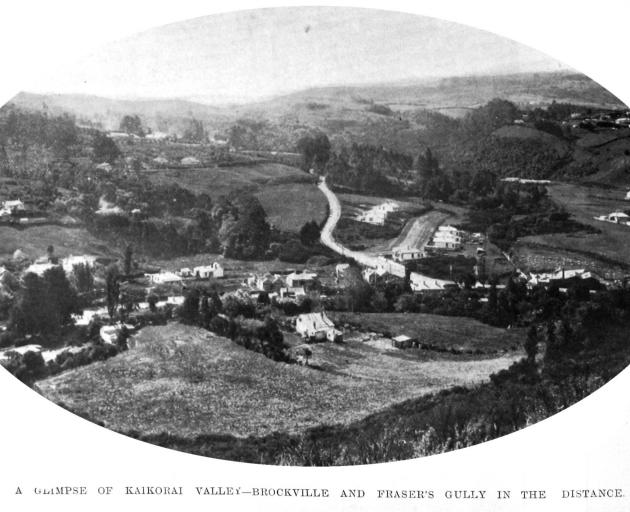 A glimpse of Kaikorai Valley with Brockville and Fraser’s Gully in the distance. — Otago Witness, 30.3.1920. COPIES OF PICTURE AVAILABLE FROM ODT FRONT OFFICE, LOWER STUART ST, OR WWW.OTAGOIMAGES.CO.NZ
The proposal to erect a new Town Hall in Dunedin has been further considered by the Finance Committee of the City Council, more particularly in regard to the finding of funds to cover the cost of the building. A report from the town clerk, which was before the committee, set out a method whereby the financing of the proposal might be arranged internally, and the committee reports that it is now of the opinion that the town clerk's suggestions are the best that can be devised to meet the position. Briefly, they are that certain deductions should be made over a period of years from the annual contributions of the trading departments to the renewal fund account, and that such deductions should be diverted for the purpose of covering the cost of the Town Hall building. The committee is of opinion that the town clerk's proposals should now be approved, and while it is recognised that the building is urgently required, it is suggested that the calling of tenders for the work should be delayed for a period of nine months, when it is possible that industrial conditions may have improved.

During the period of the war the public submitted more or less cheerfully to the constant succession of street collections which were taken up on behalf of a variety of patriotic objects, but when the termination of the war failed to bring about the end of this serviceable means of raising money a long-suffering public at last gave voice to some spasmodic protests. The General Committee of the City Council, in declining an application from the Y.M.C.A. for permission to take up a collection in the streets of the city, expresses the opinion that the time has now arrived when street collecting should be limited as far as possible. So far as the general principle is concerned the expression of opinion given by the committee will be widely endorsed.

During the course of an inquest which was held at the Hospital on Saturday morning respecting the death of an infant, the coroner (Mr J. R. Bartholomew, S.M.) asked Dr Siedeberg if she had any definite view as to the practice of keeping babies in bed with their mothers. Dr Siedeberg replied that it was a very pernicious practice, and she did not see how a child could very well survive the chance of being overlaid. The more the public was warned against the habit the better, because it was a most regrettable state of affairs to lose a fine healthy child in such a fashion.

Those persons of an allegedly humorous turn of mind who, when speeding a departing bride and bridegroom on their honeymoon, chalk the words ‘‘Just Married’’, in a prominent position on the side of a railway carriage, may be surprised to learn that such an act constitutes a legal offence. Several cases have recently come under the notice of the Christchurch railway staff (states the Lyttleton Times), and it is intended to take steps to ensure the punishment of the offenders. It is stated that chalk will ruin the varnish used on the carriages, particularly if the chalk be of the scratchy kind, and even after a fresh coat has been applied the marks will often show through the varnish.