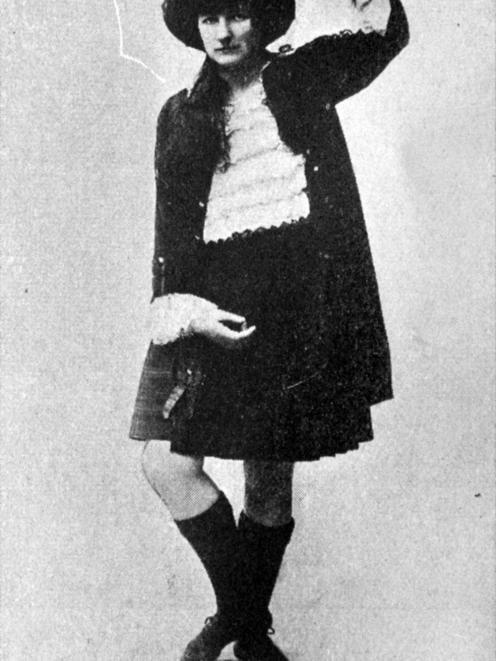 Edna Gray, of Dunedin. — OtagoWitness, 4.10.1921
The monthly meeting of the Gaelic Society was held in the Oddfellows’ Hall, Stuart street, last evening.

There were no fewer than 10 songs in the national tongue on the programme, and, needless to say, they all received the hearty applause of the audience. Bard McFadyen opened the programme with a Gaelic song. Mrs McKay sang “An t-Eilean Muileach” and “Mo run goal diloas”; Miss McLeod gave “Faill-ill-o angus Ho-ro eile” and another; Mr Kennedy also delighted the audience with a Gaelic song; Mrs Murray sang “Fear a’ bhata” and ‘‘Ho ro mo nighcan dona bhoidheoch.” Chieftain J.D. Cameron’s name appeared for “Maire my Girl,” and to an encore he gave “The Bloom is on the Rye”; Miss Gardner gave “Ye Banks and Braes,” and to a recall sang “Afton Water”; Miss Jemima Munro and Miss Muriel McKenzie danced a seann triubbais; Miss Georgina Munro and Master Bobbie Wright and Miss Jill Fox danced a fling: Miss Millie Fox and Miss Edna Gray gave a double sailor’s hornpipe, and Miss McKenzie and Miss Fox a double jig. Piper Bowman supplied the national music, and Mr Alex McKenzie was MC.

A Press Association telegram from Christchurch states that at yesterday's meeting of the North Canterbury Hospital Board Mrs Herbert moved that the board urges the Government to make provision for sanatorium treatment for undesirable consumptives, the term undesirable meaning persons of ill-repute, drunkards, etc, who have no regard for their own health, and are a menace to the community. Mrs Herbert related a number of cases of consumptives who would not stay in a sanatorium, but lived in their own homes under insanitary conditions without proper health precautions, and in such a fashion as to make themselves a danger to the community. This prevalence of such cases, she declared, could be demonstrated beyond any possible doubt. There was only one remedy: to provide a home where consumptives who would not live a proper way could be detained. Dr Fenwick seconded the motion. Mrs Herbert, he said, had not spoken any too strongly.

Compulsion was necessary to deal with such cases. She had mentioned that what the community needed was a “lock hospital” for consumptives of this class. It was useless to talk about individual liberty while such people were allowed to go about infecting others. Such a measure bore directly on the welfare of the coming generations. The motion was carried unanimously.

New tramcars almost ready
Speaking at the meeting of the City Council last evening, Cr Scott (chairman of the Tramways Committee) stated that the work of assembling the last of the 10 new tramcars recently imported from Sydney was now in progress. On one of the cars the brake equipment had been completed, and the car had been on the road that day. Apart from a little heating, owing to the tightness of some of the new bearings, it had given very satisfactory results on its trial run, and the Government engineer was prepared to test the car at once, so that as soon as he certified his approval, the car could be placed in commission. At a later stage of the meeting Cr Begg expressed the hope that the Tramways Committee would not allow the new cars to be disfigured with advertisements, as was the case for some of the present trams. “It is a sin,” he said, “ to see the way in which they are plastered with advertising matter, especially on the splashboards, and I hope this practice will be stopped.’’ Cr Scott, in reply, said  that so far no contract for advertising had been made with respect to the new cars, but money had to be obtained somewhere.

“Those who went to the war were called ‘heroes’,’’ remarked Mr W. Perry (president of the Wellington Returned Soldiers’ Association) when addressing a public meeting last week on the need for increasing disabled soldiers’ pensions. “We were not heroes, we are not heroes now, we never were heroes, but we do say that the men who went to the war, and the wives, mothers, and sisters who sent them, played the game at that time. They don't want any credit for it, because it was their duty to do it, and they did it, but now they feel that they are justified in asking that the public shall remember that those men played the game then, and that the public should do its duty to them now.”