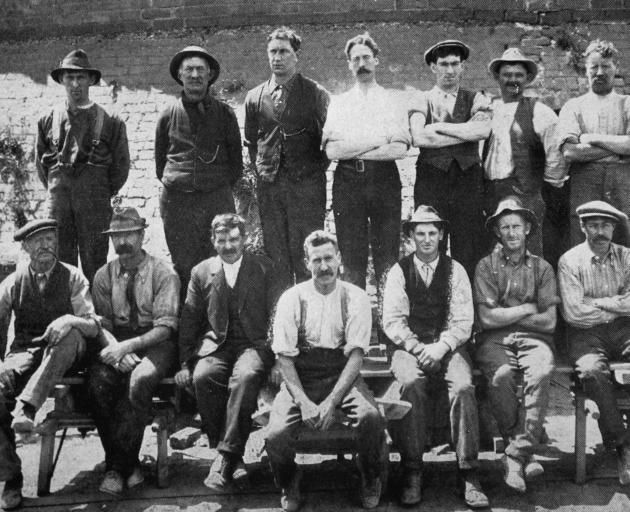 Employees at the Wingatui Brick and Tile factory. Otago Witness, 23.3.1920.
There are various anniversaries which we may appropriately desire to honour and to keep in remembrance. There are others which are our own peculiar property, and are of interest only within the narrower limits of our own local history.

Pre-eminent among these stands, or surely should stand, the anniversary of the founding of this provincial district of Otago, in the fairness and prosperity of which the present generation is able to take pride.  With the advent once again of the twenty-third of March it is both fitting and instructive to view the present in some relief against the shadowy background of the past.  We date the foundation of the settlement of Otago as marked by the arrival of the first of the vessels which came here under arrangements effected by the Otago Association.  Two and seventy years have now elapsed since the good ship John Wickliffe cast anchor at what is now Port Chalmers, and only three weeks less since the Philip Laing found quiet harbourage under the picturesque hills of historic Koputai. The pioneers of 1848 engaged in an enterprise which demanded courage and resolution in the highest measure.  The mission of the Philip Laing has not inaptly been compared with that of the Mayflower which carried the Pilgrim Fathers to New England two centuries earlier.  With unconquerable spirit the pioneers who came to Otago over seventy years ago faced severe difficulties and great hardships. They had hopes and aspirations in keeping with the character of the sturdy stock to which they belonged. How well they succeeded in the face of obstacles that might have daunted less indomitable hearts the present condition of the settlement which they founded furnishes abundant proof.

The rabbit catching industry has attracted all sorts and conditions of men, who in a few months are able to put together a cheque that would take the greater part of the year to accumulate at their ordinary occupations (says the Southland News).  In the Southland district bunny is having a bad time and if prices of skins remain as at present farmers should soon be relieved of anxiety when the department's inspectors are about. The Defence Department has dispensed with the services of a number of officers and some of these have procured the necessary equipment and seized the opportunity offered by the state of the English and American markets to add to their worldly goods, at a rate impossible in other ways.  Several captains an lieutenants for whom the department has no use at present are pursuing the elusive rabbit in the Lakes district, and the attraction this occupation has for so many throughout New Zealand has further reduced the supply of labour so far as other channels are concerned.

Horses in Auckland are not used to elephants, consequently there was something akin to a circus performance in Beach road recently (says the Auckland Star).  An elephant passed by, dragging one of the circus wagons.  He was quite calm, but not so the horses on the road.  Some tried to climb the nearest fence, and others stood stock still, as if paralysed, even after the elephant had passed by.  One animal was so affected that it stood on the tram line, and blocked the cars for close to 10 minutes before it could be made to get a move on. — ODT, 23.3.1920.