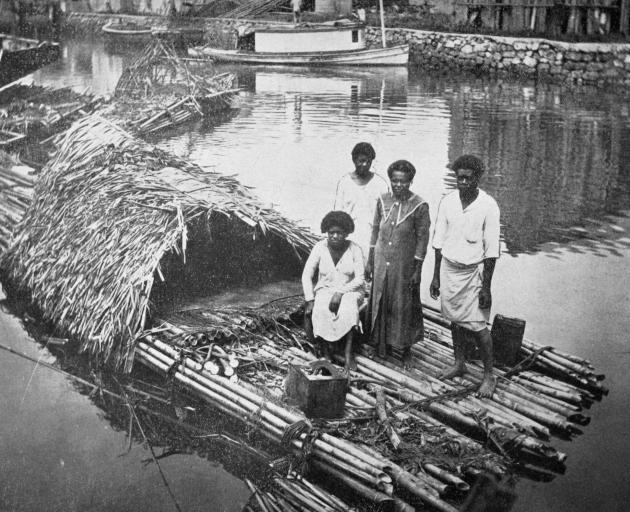 Fijians on a raft at Suva. — Otago Witness, 22.6.1920.
Mr A. Reid, of Knapdale, when speaking in support of a remit to the Southland Farmers’ Union conference, which urged the Government, when making  new appointments of stock inspectors, to appoint men competent to give advice to farmers regarding improvements in breeding stock, stressed the importance of such a measure to young farmers to whom expert stockmen would be able to give valuable advice (says the Southland News).

“Take horses for instance,” said Mr Reid. “There is more crooked work done in horse dealing than in any other class of stock. Only the other day a young fellow, a returned soldier, who has a place near me, came over to my farm with a dray and a team of three horses. We were discussing the horses and he told me he was lucky in getting them, as they were all seven-year-olds. I looked at the nearest one and to my amazement made it out to be 21.

The next I made to be 14 and the one in the shafts also over 20. The young fellow persuaded me to tell him what age I made them out to be, but I could see that he did not believe me, so I took him across to an animal in the next paddock, which I told him to my certain knowledge was 18, and showed him the points by which its age could be reckoned.” Mr  Reid classed the practice of fraudulent cheating as scandalous, and expressed the opinion that it was certainly time preventative measures were introduced.

Several matters concerning Samoa were touched upon by Archbishop O’Shea, of Wellington, in an interview given to a newspaper representative yesterday. He has just returned from a four weeks’ visit to the islands, where he has consecrated the new Roman Catholic Bishop of Samoa. The Archbishop said he was sorry to state that it was a great deal of dissatisfaction among both whites and natives with regard to New Zealand’s administration. This was probably due to a long period of military rule, for it must be remembered that the Civil government has just come into force. Mistakes, no doubt, had been made in administration, and there was also a likelihood that these had been exaggerated by the residents. Many expressed a desire to be governed rather as a Crown colony from London, whence experienced officials who understood Island problems, would be sent to Samoa. He also imagined that the Samoans themselves were partial to the United States, the manner in which that country dealt with the recent influenza epidemic, influencing them much in this respect. The repatriation of the Germans was also causing a lot of feeling.  A wholesale deportation was being carried on. Many of the people being deported had lived for 30 years in the place and others of them, especially the women folk, after all these years in the tropics, could not again stand the German winter and yet  it seems that they are being sent back to Germany on the eve of winter. Moreover, the treatment of the British and French residents during the period between the declaration of war and the occupation had been marked by extreme kindness and consideration on the part of the German authorities.