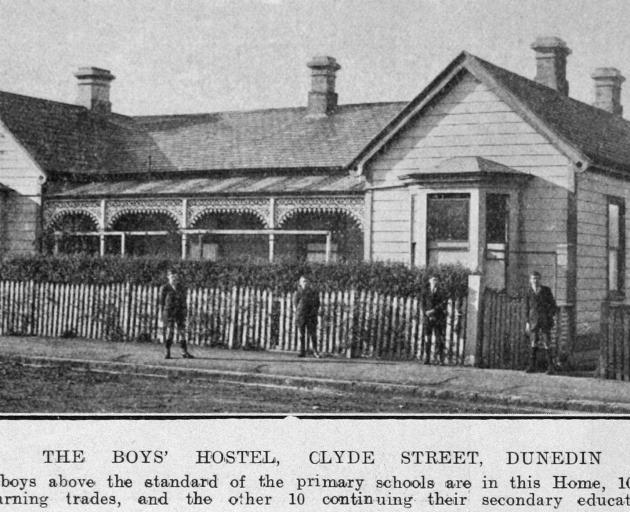 The Presbyterian Social Service Association boys’ hostel, Clyde St, Dunedin, home to 20 boys, 10 learning trades and 10 continuing secondary education. — Otago Witness, 23.8.1921.
An outstanding organisation in keeping with this spirit of the times — an organisation which has done much to foster and spread this spirit as well as being an expression of it — is the Presbyterian Social Service Association.

On the first of next month this organisation will have been in existence for exactly 15 years.

There are 60 boys in the Glendining Home, 42 boys and girls at Grant’s Braes, 20 boys at the Clyde Street Hostel and 50 boys and girls boarded out in private families.

In the hostel the boys are given opportunity for higher education. When the time comes for the boys to leave school they are given a fair choice of occupation, and in the majority of instances they go on to a farm to learn farming.

There is a craze among the boys just now for joining the navy, and some will be going forward to the training ship shortly.

Those who fancy a trade are allowed to prepare for it, and at the present time there are boys learning carpentry, cabinetmaking, mechanical engineering, electrical engineering, printing, manufacturing saddlery, drapery and rangemaking, and boys going to the High School. One is going on to the University next year, and another graduated MA there recently.

A staff from the Telegraph Department has been engaged for the past week installing a new telephone switchboard in the Middlemarch Post Office. The new board provides for 100 connections, the previous one in use having become much too small. It is well worthy of note by residents of the Strath Taieri (our correspondent remarks) that, if another 10 or 12 subscribers were connected with the office, an 8am to 8pm service would be granted, and an officer to attend to the telephone alone would be appointed.

Now that the new line to Dunedin is giving satisfaction the extension of hours would be a great boon to the district. The post office part of the railway station, which latter does duty for all departments of the public service, is undergoing structural alterations. A separate telephone room is being allotted and the public delivery counter is to be reconstructed so as to increase the facility with which officials can deal with business. These alterations will make for greater privacy in the transaction of the public business.

Soldiers to get preference

“Out with the woman from the public offices as long as our returned boys are walking the streets out of work,” said Mrs Emily Nicol at a meeting of the Soldier Mothers’ League, Auckland.

This statement was approved by those present. Mrs Nicoll argued that some women were only working for pocket money, while returned soldiers wanted employment to maintain themselves.

“Football seems to be a religion in New Zealand — parsons, mayors, everybody seems interested in it,” said Mr T.H. Bosward, manager of the New South Wales Rugby team which is to play a New Zealand team at Christchurch tomorrow.