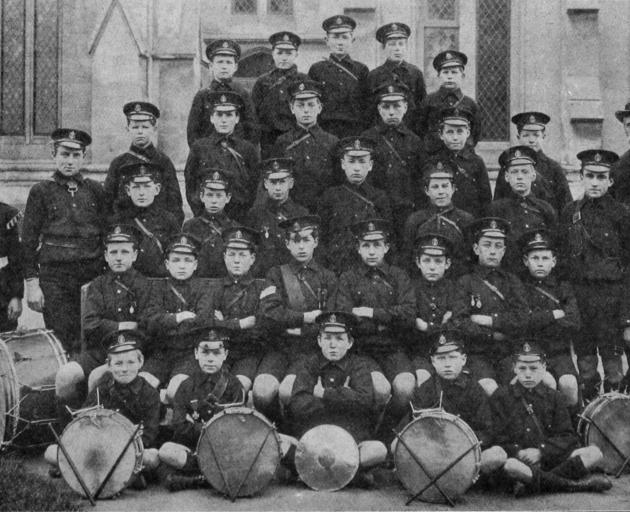 The Albany Street School band, winners of the A Grade fife and drum contest at the Dunedin Competitions Society's annual festival. - Otago Witness, 16.9.1917.
"In view of the fact that so many of our finest men have been killed or disabled during the war, we should make every effort possible to save this small army of children, most of whom, if the State stood aside, would not only be lost to the State as citizens, but would become a hindrance or a menace to the public well-being.''

With these words the Minister of Education (the Hon. J. A. Hanan) prefaces his interesting memorandum dealing with reforms in connection with the industrial school system of New Zealand. There are 4123 children under the control of the department. The Minister states that it is well that the State is prepared to stand ``in loco parentis'' to this large family of waifs and strays, but it is a matter for public concern that year after year there should be a constant supply of such children claiming the State as its foster-parent.

It has to be admitted with regret that home influence is not so strong nor of so fine a type as it was a generation ago. It has often been urged that, rather than the children, parents who have proved themselves unfit to be parents should be placed under restriction. It certainly seems to be the height of folly to take children from a home which is judged to be unfit for children and from parents who are unfit to rear children, and yet to wait year by year for the succession of additional children which proceeds from the same home.

In many cases the evil effects cannot be remedied even if the children are taken charge of from infancy, for physical or mental infirmity are often stamped on the children for life through the moral or physical degeneracy of their parents.

The Tivoli tea-rooms, situated in Stuart street, were formally opened yesterday afternoon, and the many attendants had a busy time looking after the wants of a large number of people who were present to grace the occasion. The dining room, which can accommodate no fewer than 400 people, is decorated in a most artistic manner. The walls and ceiling are in white, and on the ceiling are painted red flowers and trailing foliage, giving a splendid effect. Mirrors, stands, and other aids to the lay out of the room are included.

The rooms have two main shops. In one shop pastry, etc., is for sale; in the other there are distinct departments for the sale of confectionery and pastry, and another department termed a ``marble bar'' for the sale of soft drinks. The two shops are separated from each other, though an entrance is gained to the dining room from either. A piano is placed in an alcove, and music is provided. No effort has been spared on the part of the proprietary to make the rooms thoroughly up-to-date, and one has but to view the premises to realise that it has quite succeeded in its endeavour. The manager is Mr E. Searl.

Visitors to the Triangle yesterday noticed with a great deal of surprise that the corporation employees were busily engaged in cutting down the cabbage trees which have formed such a feature of the gardens for many years. Inquiry made of Mr Tannock (superintendent of reserves) elicited the information that nearly all the trees are now in a dead or dying condition, the reason probably being that the roots have got down to the salt water. - ODT, 26.9.1917.

Industrial schools were not orphanages. They were harsh borstals, into which children were put by Courts, for what later came to be called 'juvenile delinquency'. An account is in 'Children of The Poor', by John A Lee. This system was achieved by abrogating all parental rights.