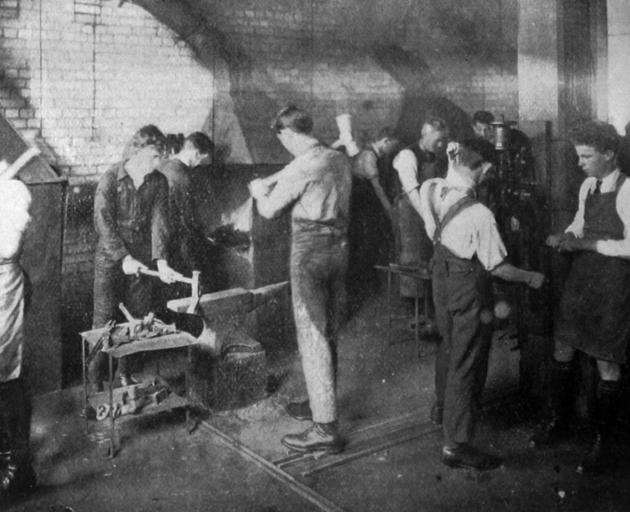 The blacksmith class for boys at King Edward Technical College. - Otago Witness, 11.11.1919.
It is no exaggeration to say that the majority of the spectators who lined the banks of the Kawarau Gorge many months ago to witness the falling of the pillars which were part of the important operations of the Cromwell Development Company to obtain electric power from the Kawarau River were pessimistic as to the ultimate success of the scheme.

They failed to realise that the huge pillars which were thrown across the river were only part of the engineering scheme, and when the river failed to rise immediately and the water to flow down the race cut into the side of the bank they freely condemned the project.

Happily for the enterprise of the company and the welfare of the surrounding district, their forebodings have been proved to be wrong and the success of the scheme is now assured. Despite the volume and speed of the Kawarau River, the pillars never shifted after settling down, and the second part of the operations was then proceeded with by the company's engineer (Mr F. B. Williams) and his contractors.

This work was to fill in the back of the pillars with stone hewn from the banks, and as the river fell concrete was mixed in with the rocks to form a very solid backing. Gradually the backing was built up, and it is pleasing to record that, whereas, on the day the pillars were thrown across, the river was 7ft below the intake to the race, for the past two months it has been running 3ft deep in the race.

The machinery for generating the electric power which is to pump the water up to a considerable height to enable it to be distributed over the Cromwell Flat - this machinery will be driven by the water from the race - is in position, and a start with the pumping will probably be made at the beginning of the new year.

There was a large attendance at the Wakari Hall last night, the occasion being an entertainment arranged by a committee formed from among the employees at the Roslyn Woollen Mills in aid of one of their number who has been laid aside for 12 months through illness.

The management of the Roslyn Picture Theatre assisted the committee in the direction of running their entertainment for bare expenses in aid of the fund that is being raised. Some 800 tickets were disposed of by the committee, and it is expected that 50 will be in hand after deducting all expenses.

The picture programme featuring ''Satan Junior'' was screened by the aid of a new fireproof machine recently imported from America by the management of the theatre, and it proved highly enjoyable.

During the evening Mr Torrance, chairman of the committee, thanked those present for the liberal manner in which they had assisted in raising funds for a worthy cause, and also thanked the proprietors of the picture theatre for their contribution to the fund.

A peculiar point of interest to farmers was mentioned by Mr J. W. Poynton, S.M., in the course of a judgement at the Auckland Magistrate's Court last week.

He stated that a person is supposed not to allow damages to accumulate, and further, is required to lessen them where possible. Thus, if a bull breaks a gate or fence, the farmer who suffers is expected to repair it as soon as he can.