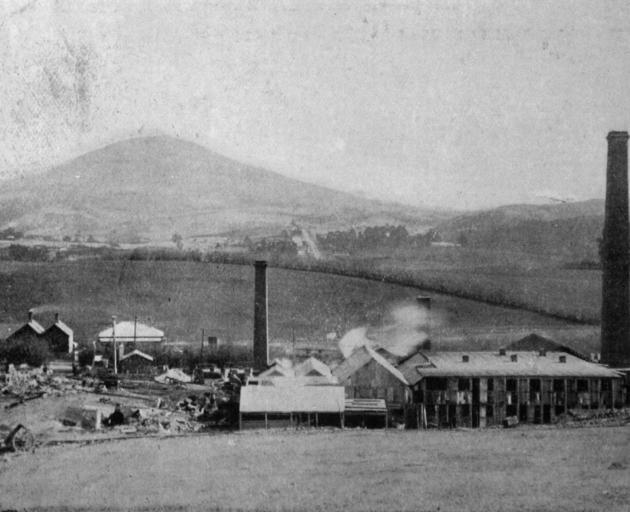 The tileries at Abbotsford with Saddle Hill in the background. - Otago Witness, 7.10.1919.
Christchurch: A conference of the committees recently set up by the Canterbury pastoralists in connection with the suppression of the kea met again yesterday.

Mr Nosworthy, Minister of Agriculture, wrote that he realised the desirableness of arriving at the real facts concerning the depredations of this bird, as there were undoubted differences of opinion.

He suggested that the conference should discuss whether a special committee should be set up to make full inquiries. If a committee were set up he would give all the facilities possible for its inquiries.

In the discussion that followed, Mr C. H. Ensor said that, having gone through the St. James country lately, he had come to the conclusion that there were fewer keas this year, but more of them were killing sheep than previously.

Another delegate expressed a similar opinion. There were, he said, more killers now, and they were harder to get at. Mr R. Guinness, speaking of the Mackenzie Country, said the Government actually protected the kea on the Hermitage Scenic Reserve.

Keas in his district were still very plentiful, and killings of sheep had been numerous. He did not think that the Government needed any further evidence of the ravage of the bird than it had at present.

Some interesting comments on the acclimatisation of salmon are contained in this year's report of the Marine Department. There was a great falling off in the run of salmon last spawning season.

Very few came up the Waitaki or any of the other rivers along the East Coast. Those caught in the nets in the Hakataramea and Dobson Rivers were about half the average size of the fish taken in other spawning seasons, and most of the fish were not in such condition as in other years.

During the previous season (1917) a very heavy run of salmon came up the Waitaki and Rangitata Rivers. Over 700 were netted in the Hakataramea River and 95 in the Dobson River, and the number of eggs collected was 1,537,000.

Last season only 38 salmon were taken at Hakataramea and 27 at the Dobson, and the total quantity of eggs collected was only 77,000. American experts think that there is no occasion to feel apprehensive unless this condition prevails for a number of years.

Professor Prince, in a letter to the department, says: ''No one who knows the habits of the quinnat salmon would frame a conclusion from the failure of one season.

I do not think that you should come to a decision on the matter for at least two years more. It is known to salmon experts that the quinnat often jump or omits a year or two years, and instead of the full grown fish returning in the fourth year they may be five, six, or seven years old before they ascend their native river.''

Among the passengers who arrived from Australia by the Maheno was Father P. M. Lynch, well known on both sides of the Tasman Sea.

He is paying a flying visit to New Zealand before proceeding to the Orient to take up a position in Malate, Manila, as Superior of the Redemptorist Fathers.

Since 1898 Father Lynch has been at work in most of the big centres in the British Isles, the dominion, and Commonwealth, and lands adjacent to the China Sea.