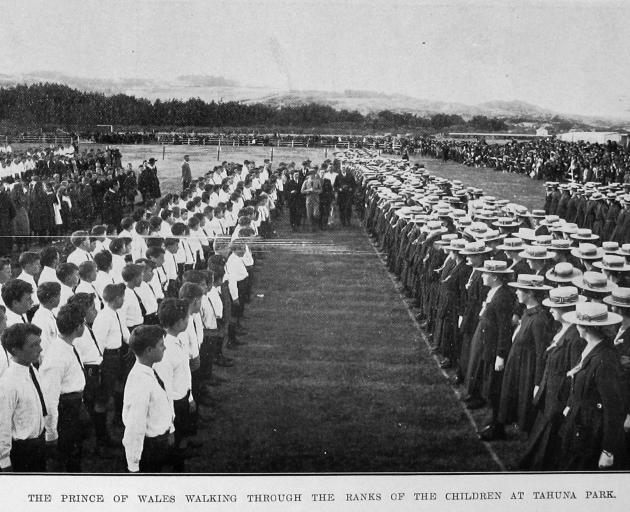 Edward, Prince of Wales walks through the ranks of children at Tahuna Park. — Otago Witness, 25.5.1920. COPIES OF PICTURE AVAILABLE FROM ODT FRONT OFFICE, LOWER STUART ST, OR WWW.OTAGOIMAGES.CO.NZ
The official opening of the Kelsey-Yaralla free kindergarten, the handsome new building destined to carry on the work which was performed in the Albany Street gymnasium and in other places for a number of years, took place on Saturday morning. There was a large attendance of those interested in kindergarten work and in education matters in general. Mrs Gilkison, who was president of the Dunedin Free Kindergarten Association when the building scheme was launched, gave a brief summary of the work of the Yaralla kindergarten in Dunedin, stating that it had had its origin as far back as 1891 and during the intervening years it had experienced many changes of fortune. One of its greatest difficulties had been the lack of a permanent home, and now after close upon 30 years of wandering in the wilderness they had a home which in many respects represented the attainment of their ideal. She thought they would all agree with her in that statement because the building occupied a splendid situation and the sun could not be kept away from it.

One of world’s oldest volunteers

Mr Thomas Morris, who died at his residence at Frederick Street on Saturday, was born in at the Cloddia in North Wales, County of Montgomeryshire on June 6th 1836. At the age of 15 years he was apprenticed to the saddlery trade in Newtown, Montgomeryshire, to one John Oliver whom he served faithfully for five years. When his apprenticeship was up, he went to London to work for Messrs Cuir and Sons, saddlers to the Queen, and was engaged in making saddles for the Crimean war. He took a passage to Melbourne in the old sailing ship Red Jacket and arrived in about 1861. There he worked at his trade but found the hot climate too trying, so after three or four months he sailed for Dunedin. Here he worked for Mr Joseph Reany, who was in business as a saddler in Rattray Street, later starting on his own account making saddles to the trade. In 1865 he started business in Oamaru where he remained for 14 years before retiring to make his home in Dunedin. He was never married. The late Mr Morris was one of the oldest volunteers in the world. In 1859 he joined the Montgomeryshire Volunteer Company and was for two years a member. In 1862 he joined the artillery in Dunedin and won second prize in the first competition for Mr Mason’s (the first Mayor of Dunedin) silver cup. In 1865 he joined the Oamaru Rifles and won two gold medals and two silver medals, also a gold watch and a silver cup.

Exceptionally high tides have been the rule during the past few days. The ordinary high tide in Otago Harbour runs from 5ft to 5ft 6in, with the occasional 6ft rise at spring tides.The highest recorded tide for the past 30 years registered 8ft 3in. That rise,which took place about 9 years ago, is generally regarded as the record high tide for this harbour. During the past few days the high tides have approached to within a matter of a few inches of that record. Yesterday’s high tide registered only 6ft 6in which although unusually high showed a distinct falling away from the extremes of the previous few days. Seafaring men invariably associate abnormal tides with very fine or very rough weather. The weather for the past few day, with its heavy southwester and fierce snow squalls has undoubtedly been very rough.