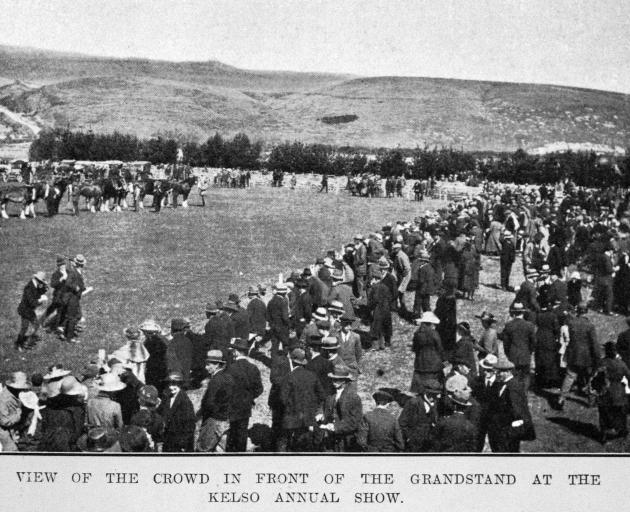 The Kelso A and P show on November 2, 1921. — Otago Witness, 15.11.1921. COPIES OF PICTURE AVAILABLE FROM ODT FRONT OFFICE, LOWER STUART ST, OR WWW.OTAGOIMAGES.CO.NZ
The Kelso Agricultural and Pastoral Association is evidently flourishing, and advancing by leaps and bounds, as was evidenced at its annual show, held at Kelso on Wednesday last.

The proof of its advancement is found in the fact that the entries in practically all sections have  nearly doubled. The cattle section shows an increase of 87 in entries; sheep about 70, draught horses 30, light horses 20, and dogs 10.

In addition the exhibits in dairy produce have advanced by about 100.

On entering the ground one thing that would strike the non-resident of the district was the extraordinary number of motor cars ranged about the ring. It would seem that prosperity is the handmaiden of those resident about Kelso; even though times may be, and are not, quite as good as they were. The show was run on excellent lines; everything went without a hitch, and the eleventh show of the association was decidedly one of the most successful — it may be the most successful — yet held.

In the financial statement brought down by the Minister of Finance in the House of Representatives last night, the Minister said that the erection of workers’ dwellings was retarded very much during the earlier portion of the year, owing to builders being unwilling to tender at a satisfactory and fixed price, and also to the difficulty in obtaining materials. Consequently it was impossible in many cases to arrange for contracts for dwellings at a price within the statutory limit of £1000.

Every effort was made to proceed with the dwellings by other means, such as by employing day labour or by letting small contracts to workmen or groups of workmen for labour only, the department supplying the materials and advancing the money as the work proceeded. The total number of dwellings built or otherwise provided, including those still in the course of erection was 508, and the estimated cost was £466,000, including land and administration charges.

These figures included 96 houses purchased by the department for applicants.

The construction of waterworks to lead water on to arid and semi-arid lands in Central Otago had made substantial progress, and during this year water would be supplied to a
large additional area. The utilisation of water on lands already commanded was steadily increasing and the revenue, while far from the maximum to be ultimately received, already rendered the scheme self-supporting.

It was proposed to proceed with this important work, which, in addition to being practically profit earning, would greatly increase the productivity of Central Otago, and consequently the dominion as a whole.

A considerable amount of the most up-to-date machinery had been procured and was now mostly at work.

The results so far had been good, and as the men working in connection with the machinery became more accustomed to the new conditions, further improvement might be confidently looked forward to. Ample labour had been available, and in view of unemployment considerable work had been opened up which would not otherwise have been commenced. — ODT, 4.11.1921.