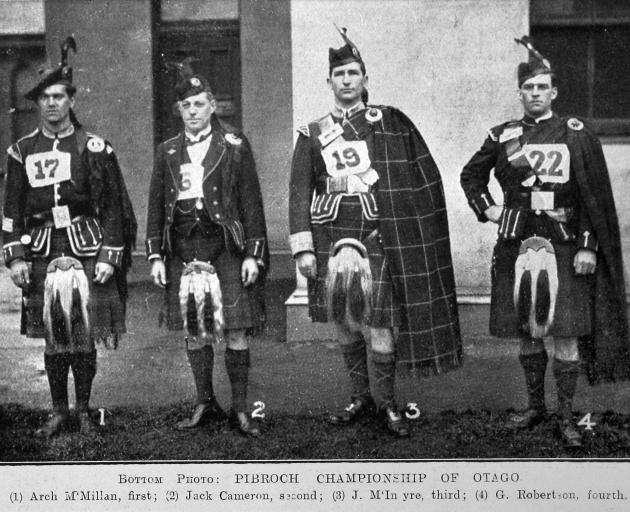 At the annual competition of the Dunedin centre of the Piping and Dancing Association, winners of the Pibroch championship of Otago were Arch McMillan 1, Jack Cameron 2, J McIntyre 3, G Robertson 4. — Otago Witness, 22.6.1920. COPIES OF PICTURE AVAILABLE FROM ODT FRONT OFFICE, LOWER STUART ST, OR WWW.OTAGOIMAGES.CO.NZ
Accounts now available in Home papers to hand of May Day proceedings in the Old World make interesting reading. Since England ceased to be a mainly agricultural country and became industrialized, the old celebrations of May Day have been falling into desuetude. Now, moreover, that Great Britain has become more closely linked up with the Continent, the day seems to have acquired a new character. The ranks of labour, following the lead of workers abroad, have made it their own, turning it into an occasion for mass meetings and propaganda. In Great Britain, France, Italy, Germany and other countries Labour made a holiday on May 1 and voiced its grievances. London saw the biggest May Day procession on record. From all accounts, the Embankment was a sight to behold. Eight processions from different quarters joined forces and a great march, with banners, bands, and decorated vehicles followed through the West End to Hyde Park. There ensued a programme of no less than 72 speeches, delivered from 12 separate platforms. Those who wearied of English could listen to addresses in Russian, Polish, French, Italian and Esperanto. Throughout the country it is estimated that something like eight million workers took part in the May Day demonstrations. Probably this is a highly speculative estimate. Thousands of factories and workshops were closed, but essential services went on as usual. After all no harm seems to have resulted.

The Otago Harbour Board proposes to hire the Bluff dredge Murihiku for the filling in of the estuary between below Lake Logan, as it is likely to expedite that work at a moderate cost, whereas this filling in by our own plant would entail the use of dredge 222 and of the Vulcan pump dredge. The Murihiku, because she is fitted both with bucket dredging and pumping machinery, can do the work single-handed. She can lift the spoil and then pump it over the retaining wall on to the reclamation area by means of her own appliances. Some months are likely to elapse before the Murihiku is available for charter by the Harbour Board, provided that the board decides to charter her. She is at present under overhaul at Port Chalmers, getting ready to resume dredging operations in Bluff Harbour.

“I cannot leave New Zealand without recording my appreciation to the press of the dominion for their never-failing courtesy towards her Excellency, myself and my staff,” said his Excellency the Governor-General, the Earl of Liverpool, at Wellington on Thursday night. “I do not wish to flatter, when I say that these islands can well congratulate themselves on the high reputation which has been reached by the dominion press for the accurate news, which is everywhere circulated, even in the most isolated parts of the country.

‘‘We have seen the result of propaganda during the late war and the keen interest which is taken in everything affecting the welfare of the community. We can, therefore, rest assured that so long as those chiefly concerned consider it their duty, our British press must only be the ensample of everything which is clean and right, and the profession will take a place second-to-none amongst their competitors in other lands.” (Applause).

Thank you so much for publishing this photograph. The piper on the left who won the competition was my grandfather Archie McMillan. What a lovely surprise to be sent this by a cousin this morning.
Regards Fiona McMillan