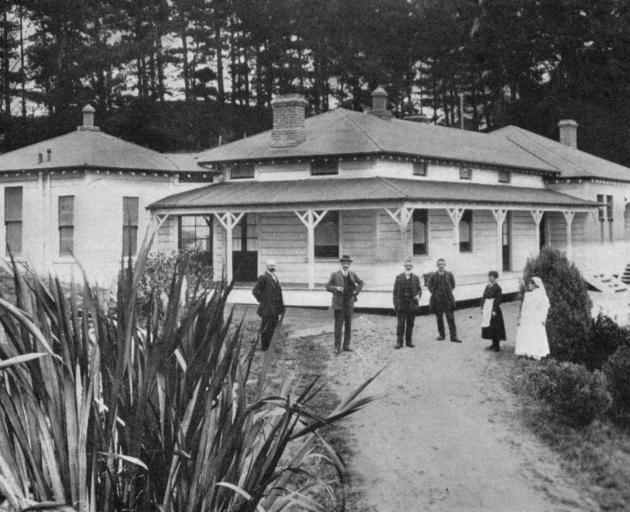 Kaitangata Cottage Hospital. - Otago Witness, 4.6.1919
In Burwood Avenue, which runs from High Street towards the end of George Street, stands the very charming bungalow residence that was until recently the home of Professor Waters, of the Otago University.

It stands near the avenue on three-quarters of an acre of land. The grounds immediately surrounding "Dunrowan'' are laid out as a shrubbery, with well-trimmed hedges that give the abode a restful environment. At the rear a paddock falls away to the west, and is sufficient in area to provide ample room for building extensions. This delightful and valuable property has been presented to the Presbyterian Social Service Association by Professor Waters, on condition that it is to be used as a convalescent home for women. The official dedication took place yesterday, in the presence of a large number of ladies. Dr Bowie, in a brief address, pointed out that Professor Waters had generously presented the home to the Presbyterian Social Association for a specific purpose - that of providing a home for convalescent women. In a hospital acute cases were dealt with, the aim being to get such cases under treatment as soon as possible, and the moment they are ready to leave to get them out of the hospital. Women patients with families, of course, anxiously looked forward to getting back to their homes, but when they reached there, instead of getting the rest required for recovery, they too often found that a lot of back work had to be taken in hand.

It is very encouraging to know that the operations of the Otago Agricultural and Pastoral Society, especially as regards its Winter Show, receive increased public encouragement year by year. The mere fact that the attendance at the annual exhibition, which was opened yesterday in the Brydone Hall and annexes, was not only well maintained, but exceeded that of the past few years, was but one of the satisfactory features connected with the agrarian progress of Otago, for these exhibitions have much more in them than the amusement of a few thousand people for a few days each year. It is a special matter of congratulation that in the life history of the society the sons of the soil find their way to Dunedin in ever-expanding numbers, no doubt to add to their rural knowledge, to listen to, and share in, the interchange of experiences on various matters pertaining to pastoral and agricultural affairs, and to profit by the demonstration of new methods which experience has proved to be advantageous.

The Mayor of Christchurch has been asked to take in hand two cases in which employers have refused to reinstate returned soldiers in their former positions. A man 60 years of age, who succeeded in going with the Expeditionary Force, was away for three years. When he asked to be reinstated, his employer put him off for a month, and then engaged him temporarily. A resident of Christchurch has informed the Mayor that one of the banking institutions has refused to reinstate his son, who did good work in the war. As against this treatment, the Mayor has been informed that when a soldier returned to a large drapery firm in the city, he was not only reinstated, but also was handed the sum of £150, representing half wages during his absence. - ODT, 4.6.1919