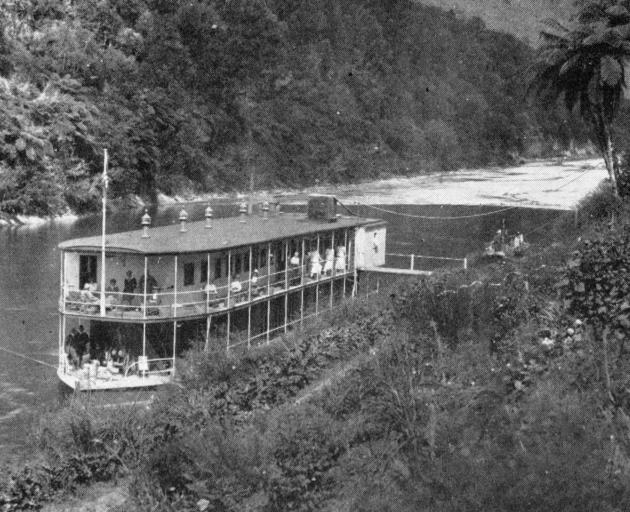 A houseboat on the Wanganui River. - Otago Witness, 12.3.1919.
The official record, contained in the London Gazette, of the award of the Military Cross to Lieutenant James Alexander Roy, N.Z. Rifle Brigade, is as follows:

''For conspicuous gallantry and devotion to duty. When the enemy attacked in force, the section occupied by this officer's platoon found a salient of advanced posts on which the brunt of the attack fell. He went from post to post, cheering and steadying the garrisons, and setting such a fine example that the enemy were completely held up by his platoon. When the enemy tried to push up the posts through an old communication trench, he met them with bombers, and swept the open ground with a Lewis gun, inflicting a great number of casualties.''

A bar was subsequently added to the Military Cross on the following grounds: ''For conspicuous gallantry and devotion to duty. Accompanied by one man, he raided the enemy's trenches, and under cover of trench mortar bombardment proceeded down an old sap towards a machine-gun post. As soon as the bombardment lifted he rushed in and captured two of the enemy and brought them back to his lines. He twice went back and captured two more prisoners and a machine-gun. He showed splendid enterprise and daring.''

The gallant winner of these distinctions is a son of Mr J. R. Roy, of Wairuna. Lieutenant Roy, who was a sergeant in the Territorial Force, enlisted as a volunteer, earned his commission while in camp, and sailed with the Twenty-eighth Reinforcement.

He was in charge of a platoon for nine months in the firing line. He was then promoted to the Intelligence Department. He was seriously wounded on the 8th October last, and was removed to the Convalescent Hospital in the end of January. He is a total abstainer and non-smoker.

At the sitting of the Influenza Epidemic Commission in Wellington on Tuesday alcohol found an advocate in Dr T. H. Valintine (Inspector-general of Hospitals and Chief Health Officer). ''I consider,'' he said, ''that during an influenza epidemic it should be possible for people to obtain liquor.

I would suggest to the commission that the president of the British Medical Association should be called to give evidence on the subject. There is no doubt that alcohol forms a very important part in the treatment of influenza. I am certainly of the opinion from what I saw of the recent epidemic that alcohol should be made available.''

A striking example of the rapid growth of the Pinus Radiata is afforded by the belt of trees growing inside the western wall of the A. and P. Show Grounds (states the Southland News). Planted about six years ago, some have already attained a height of 20ft, and their symmetrical shape and vivid green constitute a pleasing feature in the landscape.

The results so speedily attained prove the fertility of the soil, which is of a similar nature to the bulk of that now being brought into the cultivation on the reclaimed areas.

A little excitement was caused at Wallacetown, when two wild bullocks in the fat cattle pens lifted off the gate with their horns and made their way into the race. Men of all ages showed wonderful agility, and before the animals could do any damage the race was cleared.