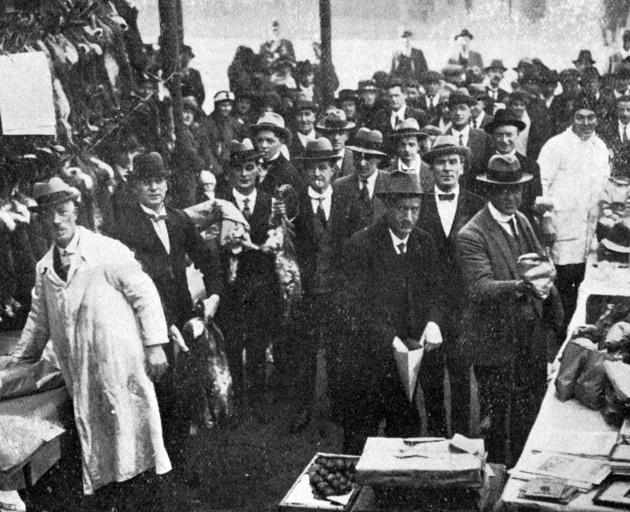 Commercial Travellers' Club's "Paddy's market" in Dowling St, Dunedin, selling hares, rabbits, vegetables, fruit and other goods in aid of the poor and needy. — Otago Witness, 20.6.1922
Busy though they were on Friday, members of the Commercial Travellers and Warehousemen’s Association were unable to dispose of all the gifts that had come forward to aid them in their campaign against the distress caused by unemployment.

Numerous articles remained undisposed-of under the lucky bag system, and these were got rid of on Saturday under the straightout selling system. "Who’ll take a bottle of malted milk — only a shilling sixpence" was the query, and invariably a purchaser was found. Honey, bacon, fruit, bottles of cordials, bottles of preserved fruit, and even second-hand clothes and boots found purchasers under the persuasive eloquence of the travellers, who proved wonderfully successful salesmen.

But the chief attraction was a line of 370 hares, obtained from drives at Hakataramea and other places, which sold very rapidly at 1 shilling apiece, while a few dozen rabbits found ready purchasers at the market rate of 6 pence each. By about noon every article had been cleared, and, as there was not one that was not a gift, the fund was considerably swelled.

At the close of the sale the total receipts had mounted to £1164 14s 4d, but this sum will be added to yet, as the result of other donations of goods and money.

Captain J.H. Crawford presided at an impressive unveiling ceremony of a large war memorial tablet in the Port Chalmers School yesterday afternoon. On the centre of the tablet are engraved the names of 59 fallen soldiers, and on the side tablets are the names of 258 returned soldiers and six returned nurses, all ex-pupils of the school.

Mr H.E. Moller said that it was one of the best school memorials in the dominion.

Captain Crawford, who was himself dux of the school in 1882, in asking Mr W.R. Brugh, on behalf of the Education Department, to take charge of the tablet, said he did so knowing it would always have an honoured place on the walls of the school.

The weather was fine for the ceremony, but intensely cold; nevertheless the large gathering of pupils and adults remained until the final benediction by Captain Mead concluded a somewhat lengthy programme.

Mrs R.H. Bligh’s scheme of running a Saturday night dance on the continental open cabaret system is proving a decided success. The Choral Hall, where the gatherings are held, is most attractively fitted up with some small tables and tastefully decorated with flowers and greenery.

A special band is provided, formed on the London style, under the conductorship of Mr Nisbet, and furnishes admirable music for the latest style of dances.  About 30 couples assembled on Saturday night, so that, while the attendance was satisfactory, there was ample room without discomfort. The floor was excellently prepared and the hall presented a picturesque appearance while the tasty and in some cases striking costumes of the ladies contrasted effectively with the evening dress of the gentlemen.