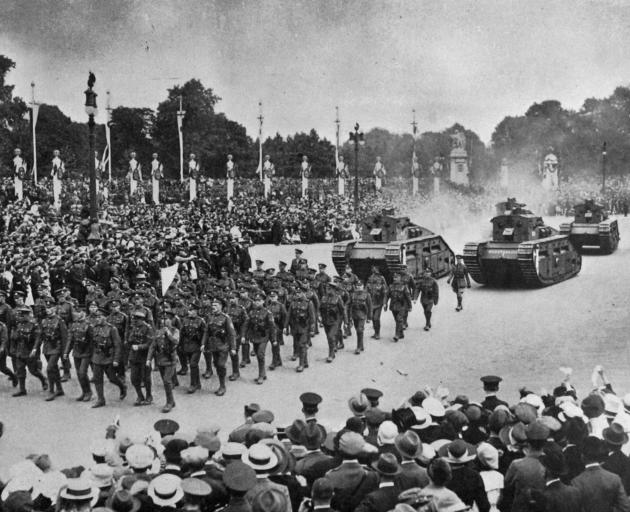 The Tank Corps march during the Victory celebrations on Peace Day in London. - Otago Witness, 30.9.1919.
The Hon. R. Heaton Rhodes, M.P., who, in November, 1917, went to England to inquire into the organisation and distribution of the funds of the branch of the New Zealand Red Cross Society in London, returned by the Corinthic.

Chatting to a Christchurch Press representative, Colonel Rhodes said that he has found that wounded New Zealand soldiers suffered from no lack of medical attention and Red Cross requisites; in fact, they were as well looked after in this respect as any troops.

Incidentally, he pointed out that at first our men were not very much at home in the hospitals in England. They could not get used to the strict discipline that the ''Tommies'' submitted to, and the nurses and sisters did not understand our boys.

Later on, however, all concerned got to understand each other, with the result that at Christmas last, a number of wounded New Zealanders asked that they be allowed to remain over the festive season in the English hospitals. Colonel Rhodes took the opportunity of visiting the New Zealand internment depot in Switzerland.

He found that, on the whole, the men were well treated, but the Swiss authorities - at least in some of the districts - were inclined to be very strict, and this proved somewhat irksome to our men.

Referring briefly to the administration of the Red Cross Society's funds, Colonel Rhodes said that any balance would be returned to the executive in Wellington, and the proceeds of the sale of buildings and surplus stores would also be returned.

Veterans all were the men of Anzac who attended a smoke concert held in the Oddfellows Hall, Rattray street, last night. They had earned this splendid title by reason of the fact that they had sprung to arms on the outbreak of war, and had left New Zealand with the Main Body; and it was essentially fitting that they should hold a re-union to meet the old comrades of many a hard-fought fight, to shake each other by the hand, and to talk over the experiences on the battlefield and of the campaigns of Gallipoli, and of the days in France.

''The Past and Future of the Flax Industry'' was the title of a paper read last week by Professor Easterfield at a meeting of the technological section of the Wellington Philosophical Society.

After explaining the processes of converting the green flax fibre, Professor Easterfield quoted remarks on the industry by Mr Seifert, the well-known miller, who estimated that about 60,000 acres in the dominion were devoted to the cultivation of flax.

In the Manawatu the land would produce a flax crop every four years equal to 30 tons per acre. The future of the industry, he contended, depended upon cultivation, and he suggested that experiments should be made to discover which was the best class of phormium tenax to cultivate, having regard to rapidity of growth, quantity of fibre, and disease-resisting qualities.

Bullock on the rampage

A fat bullock in a weight-guessing competition in Nelson created a mild stir while being driven along a road. Some small boys irritated the animal and made him restive.

He first paid attention to a big plate glass window in Mr Carpenter's motor premises, but no damage was done. The window of Mr P. Byrne, saddler, next door, was not so fortunate, the animal pushing his head through the glass.

Hon Heaton Rhodes wasn't at The Front, and the full story of British 'discipline' was not known in the early postwar years. They were 'Redcaps'. There was allied troop mutiny at Ypres. And there were executions of soldiers by firing squad. That sort of thing takes a bit of getting used to NURSES! NURSES! GREAT BIG ONES!