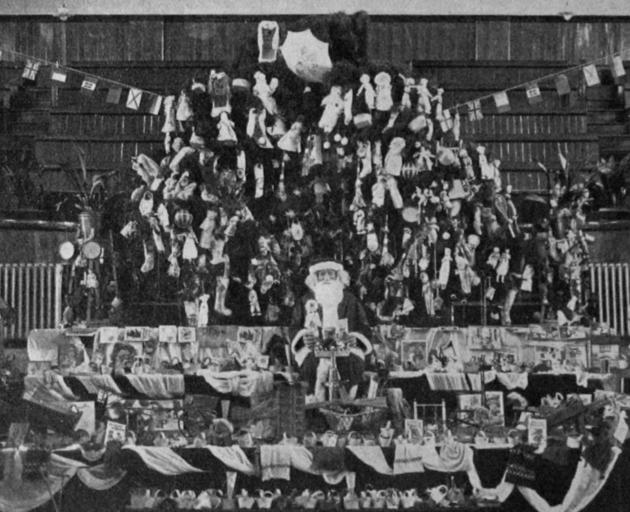 The Salvation Army’s Christmas tree for children, conducted by Ensign Coombes, Samaritan officer. — Otago Witness, 17.1.1922.
The official opening of the Louisa Roberts Hospital at Middlemarch took place yesterday afternoon. The hospital, which is the gift of Sir John and Lady Roberts, was until recently a Salvation Army home for children. It is a large house with two wings, containing 12 or more big rooms, all generously lit. Off the entrance hall are the matron’s rooms, and to the left dining room, kitchen, bathroom, etc. On the other side are the wards — two maternity, two emergency and two spaces, operating theatre, sterilising room, patients’ bathroom, dispensary, superintendent’s room, and a fine sun parlour that was formerly a conservatory. The hospital is simply furnished throughout, though quite efficiently for its purpose, and has all the necessary plumbers’ services that its work requires. The staff consists of medical superintendent (Dr Gunn), Matron (Mrs Paddock), housekeeper, and gardener. The gardener has a separate cottage close to the hospital, which stands on 17 acres of ground about eight minutes’ walk from the railway station, directly behind the showground. Ten beds have been set up, but the hospital is capable of accommodating double that number quite easily. During the opening ceremony, Mr Alex McKinnon (chairman of the local committee) conveyed the district’s gratitude to Sir John and Lady Roberts for their splendid gift.

The Christmas tree arranged by Ensign Coombs, the Salvation Army Samaritan officer, in the Citadel, Dowling street, where over 500 children received a Christmas gift, proved a great success.

The children were delighted with Santa Claus, and were in Fairyland for two hours. The tree was a picture, and represented the goodwill of many hearts and homes.

The elderly people enjoyed their part, and the social hour passed all too quickly.

Dr Jack conducted further experiments in wireless telephony from his laboratory at Otago University on Wednesday evening, and reports received yesterday showed that a new distance record has been achieved. A telegram from an observer in Hamilton stated: "Telephony received. ‘Abide With Me’ especially clear."

Prior to Wednesday the greatest distance at which music had been heard was Wellington, but this has now been extended by another 200 miles.

A report from Wellington on Wednesday’s experiments stated: "Telephony triumphant," and asked for another demonstration last evening.  — ODT, 23.12.1921.