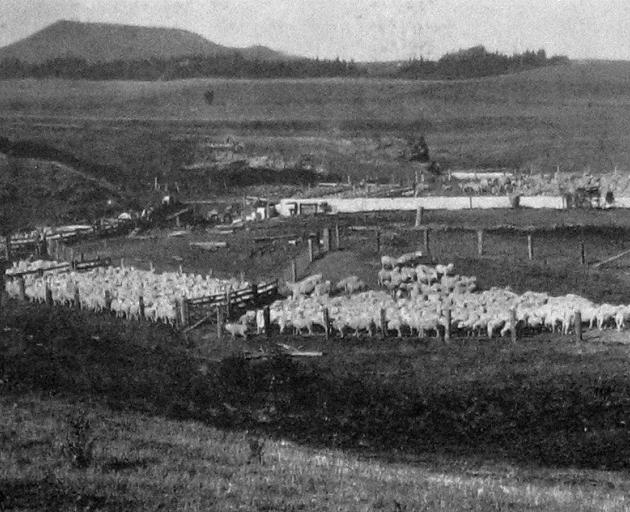 Sheep dipping: the dipping yards at Totara, North Otago. - Otago Witness, 18.12.1918.
Following on the signing of the armistice and the consequent cessation of hostilities between the belligerent nations many of the cogs in the military machine have automatically gone out of existence, and one of these, the Otago Military Service Board, was ''scrapped'' yesterday morning, when the members of the board (Messrs H. Y. Widdowson, S.M., chairman, H. D. Bell, and E. Kellett) and Mr Reynolds (secretary) were officially accorded a farewell in the Magistrate's courtroom by the Dunedin representatives of the Bar.

Mr Widdowson said that they met under the most auspicious circumstances. The great war was now over, and there was therefore no further need for the Military Service Board. No one was more glad than the members of the board. When war was declared and New Zealand offered assistance to the Mother Country it became necessary to raise troops.

These were for a long period obtained under the voluntary system, but when conscription came into force with the passing of the Military Service Act in 1916 it became necessary to establish Military Service Boards. Since the establishment of the Otago Board in November, 1916, it had dealt with 9000 appeals and applications of various kinds.

It will please the mothers and sisters of New Zealand to know, and this is an undisputed fact, that the New Zealand soldier abroad has maintained an unexceptionally high reputation for behaviour. This cannot be too widely known and appreciated.

''You can always ask a New Zealand soldier to your home and be assured that he will behave himself as a gentleman,'' said a lady in England, and the same sort of thing is heard again and again. The English nurses who have had our wounded under their care speak most enthusiastically of them.

One lady expressed her appreciation of them in terms that would appeal most to the pride of New Zealanders when she said: ''I would like to see and know something more of the mothers who have trained and sent out such fine sons.''

London: Sir James Mills presided at the Australian and New Zealand Club's luncheon to General Birdwood. Mr Winston Churchill was among those present. General Birdwood, responding to the toast of his health, said the future would do full justice to the Mediterranean expedition.

Although the Dardanelles had not been forced, the campaign accomplished the annihilation of the power of the Turkish army. No name stood higher in the world than that of the Australian and New Zealand soldiers; while in the whole army there was not any better organised or more efficient division than the New Zealanders.

The increasing popularity of Port Molyneux as a seaside holiday resort is clearly evidenced by the difficulty experienced by holiday-makers in securing cribs for residence during the holiday season. It is note-worthy that the recent influenza epidemic scarcely affected the place at all. The Caledonian Society will run its annual sports as usual on New Year's Day.