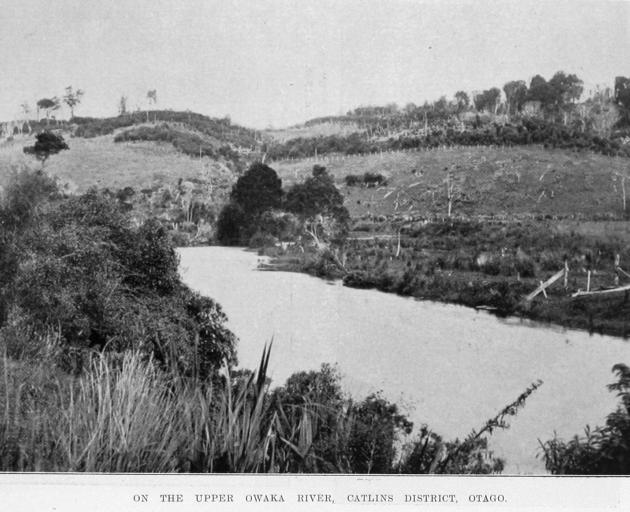 The upper Owaka River, in the Catlins district, Otago. — Otago Witness, 26.10.1920. COPIES OF PICTURE AVAILABLE FROM ODT FRONT OFFICE, LOWER STUART ST, OR WWW.OTAGOIMAGES.CO.NZ
AUCKLAND: With no gas or tram service Auckland is now in a somewhat sorry plight. The citizens are taking matters as philosophically as possible, but the inconvenience resulting from the absence of gas is increasing daily. A serious disorganisation of industry and consequent unemployment for many workers has been occasioned by the stoppage of the gas supply. One large boot factory was forced to dispense with the services of all its male hands on Friday because essential machinery could not be heated. The girls will be kept on for a while machining uppers by electrically-driven sewing machines. Another large firm has a fair reserve of coke to drive its suction gas plant, but is unable to find a suitable heating medium for melting wax for stitching and heating the machines. The men will be kept on for a few days, pending satisfactory heating arrangements being installed, but if no good system can be devised the factory will close. Steam laundries which have their own steam plant seem to have sufficient fuel to generate power for about a week, but are experiencing great difficulty in finishing shirts and collars without the gas-heated machines. Several biscuit and confectionery factories have closed down owing to lack of coke, about 50 tons of which is used a month to keep the furnaces at the high temperatures required for the work. One factory paid off 30 hands on Friday evening, while another one has dispensed with the services of all except married men, who are engaged in all sorts of jobs, from cleaning and overhauling machinery, to making new benches and cleaning. Though a number of the leading restaurants are not entirely dependent on gas for cooking, many cheerless dinners are being served in the city. Cold meat without potatoes, cold sweets and half-cold tea are the best meal hundreds can obtain. In private houses all sorts of makeshifts have been improvised. A common one is a kerosene tin with a few holes punched in it and a bar run through the sides to carry the pot or kettle.

At the monthly meeting of the Clutha County Council a long letter was received from Dr Truby King asking for repairs to the road leading from the railway station, Tahakopa, across the river and through sections 1 and 2, block II, Tautuku district. The writer stated that the road was practically non-existent and would require about 15 cubic yards per chain of metal. About 1200 cu yards of gravel would be needed. In conjunction with the Lauriston Timber Company, he was prepared to undertake the formation and graveling if the Council granted the use of the grader. They had spent a good deal on the roads and had tried to spare them as much as possible.

Dr King and Mr Matthews waited upon the council in respect to the matter. Dr King urged the necessity for doing something to make the road passible in the interest of the settlers. He was prepared to assist if the council went on with the work as soon as possible. Married man were being settled in the locality, and it was expected that next year about 100 children would be using the road going to school.

After some discussion during which Dr King suggested that if the council voted £173 he would make it up to £200, it was finally decided that £200 be voted for the work.