The Otago Motor Club provided the cars for an outing to Wingatui for the children from the orphanages about Dunedin. — Otago Witness, 7.12.1920. COPIES OF PICTURE AVAILABLE FROM ODT FRONT OFFICE, LOWER STUART ST, OR WWW.OTAGOIMAGES.CO.NZ
On Saturday afternoon over 300 children from the various orphanages in the city and all the available patients from the Forbury Convalescent Home were given an outing by the members of the Otago Motor Club. After gathering the children from the various hostels, motorists assembled in Anzac Square, there being present over 40 motor cars and 35 sidecars well laden with happy children. About two o’clock the procession moved off. Mr F.J. Carter’s car, decorated with the OMC banner, and carrying the children from the Convalescent Home, taking the lead. A most enjoyable run was made to Wingatui, the Dunedin Jockey Club having kindly given the use of its grounds for the outing. On arrival at their destination, the children were plentifully supplied with fruit, confectionery, cordials, etc, and nothing was left undone that would help the youthful guests to have an enjoyable day. Games of various descriptions were involved in, and the wee tots from one institution sang very lustily several well-known songs. A start was made for home about 4.30pm, and the city was reached shortly after five, each party of children being taken to their respective homes. The splendid response to the club’s appeal for cars was very gratifying. In fact many more cars were offered than could be made use of for the occasion, and several club members who were unable to provide a car sent along a monetary donation in order to show their practical sympathy.

Timaru: A number of leading citizens and county residents today bade farewell and presented a souvenir to Mr W.F. Alexander, who recently resigned the editorship of the Timaru Herald after occupying the position for 10 years to become editor of the Dunedin Star. The mayor (Mr Raymond) presided, and, on behalf of the townspeople, expressed his high appreciation of Mr Alexander’s services, especially during the war period, and his impartial treatment of all public questions.

The misuse of public telephone boxes is a source of much trouble and annoyance to the telegraph authorities, as well as the general public (says the New Zealand Herald). It is not an infrequent occurrence to find that these have been used for the purpose of committing grossly indecent acts. Such acts are severely dealt with under the Police Offences Act and the Post and Telegraph Amendment Act, 1913, the latter providing for a fine not exceeding £100 or for imprisonment for any term not exceeding one year. Last week a person was convicted in the Auckland Police Court and fined £2 for having committed an indecent act in one of the city’s slot telephone cabinets.

Ptomaine poisoning, the result of consuming rhubarb which had remained in a saucepan, was contracted by three Henderson residents last week (says the Auckland Star) and on the advice of a doctor they were removed to the hospital. The hospital authorities reported later that all the patients were slowly recovering. 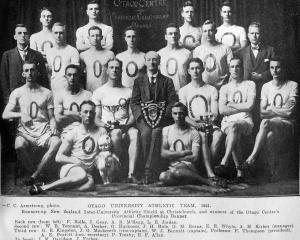