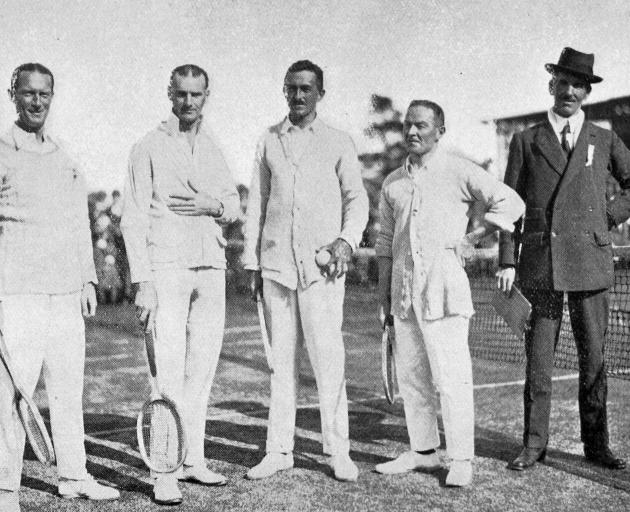 The players in the Great Britain versus Otago lawn tennis match held in Dunedin. Left to right: Messrs A. H. Lowe (Britain), G.Ollivier, Christchurch (N.Z. Champion), A. E. Beamish (Britain), S. N. Brown (Otago) and A. E. Harraway (umpire). — Otago Witness, 30.3.1920.
Death has claimed still another worthy pioneer in the person of Mrs Helen M. Elliot, who passed away at Nevis on Tuesday morning at the advanced age of 81 years.

Deceased lady, with her husband, who pre-deceased her some 29 years ago, arrived at the Bluff in the Flying Mist in 1862, the late Mr Elliot being in charge of the first draft of sheep for Messrs Rattray and Dalgety.  Incidentally, it might be mentioned that the Flying Mist foundered at Bluff on that particular trip. The first scene of the couple's activities was Invercargill.

From there they spent varying periods at Hillend, Five Rivers, Fairlight, and Kawarau Falls.  Forty-seven years ago they took up their residence at Nevis.  In 1889 they acquired the Nevis Hotel property, but two years later the deceased lady had the misfortune to lose her husband, and she controlled the hotel until 1905, when she disposed of the property.  In her control of the hotel, as in later life, the late Mrs Elliot's hospitality knew no bounds.

With the exception of but a short period, deceased  made  the Nevis her home for close on 50 years, and many can bear testimony to her untiring efforts and ready assistance to the sick and ailing, and by reason of that and the many noble characteristics with which she was endowed, deceased was admired and respected on all sides.

Deceased is survived by three of a family of five daughters (Mrs Scott, Mrs E. M'Nulty, and Mrs J. Ritchie, Nevis), and claimed 27 grandchildren and 13 great-grandchildren.

The demand for houses in Auckland is stated by agents to be greater than ever it has been. They said to-day, in reply to questions, that the principal inquiry was for houses valued at from £800 to £1000, and chiefly through the operation of the Government scheme of financial assistance to soldiers, the supply of this class of dwelling had been very much depleted.

Many people who had hoped to obtain homes for an expenditure of £1000 had eventually decided to pay £1300 to £1500 for a better class of house.

The Yorkshire Observer, in its textile column, describes New Zealand as an ideal country for sheep farming, with its favourable climate and its excellent shipping facilities.  ‘‘Satisfactory climatic conditions give well-grown and superior wools, while the rich pastures assist in the rapid development of lambs into mutton.

Fully 90 per cent of the sheep in New Zealand are crossbred to produce the mutton breeds, and there is little doubt that wool production is second in importance to the meat.  Not that the wool trade is neglected — far from it — as the merino sheep retained are chiefly employed for breeding purposes to retain the character and quality of New Zealand wools.

The crossbred wools produced are of good quality, sound in staple, and free from burr.  The merino wool obtained from New Zealand is fine in quality and soft to handle.  The frozen mutton industry has revolutionised to a large extent the wool-growing industry in New Zealand.

Fomerly, considerable quantities of merino wool were grown, but with the development of the refrigerator and the meat trade attention was profitably turned to crossbred sheep for mutton and wool.’’