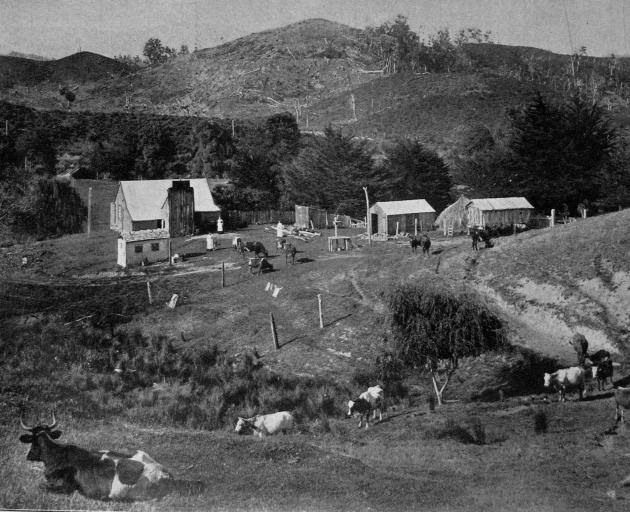 Milking time: A scene near Mangonui, North Auckland. - Otago Witness, 8.1.1919.
The part which New Zealand, the most distant portion of the Empire, has played in the present war, is one of which that small community may be justly proud (states a recent article in the London Times).

New Zealand has sent to the fighting front 99,650 troops of all ranks; another 10,080 are in camp in New Zealand. With the military organisations necessary within her own shores, and the garrison which she maintains at Samoa, together with the men engaged upon work of military importance at home, this army ranks in very high proportion to her population of only 1,150,000, nearly one-tenth. All the troop-ships engaged in transporting this force have been drawn from the New Zealand mercantile marine.

The dominion bears the whole expense of her army, its equipment and maintenance in and out of the field. It does not cost the Motherland a penny. Up to the end of August the expenditure had amounted to over 44,000,000.

Up to the latter period of 1916 volunteer application supplied all the troops required, but in 1916 a system of compulsion was instituted. The South Sea Islanders have enthusiastically contributed their quotas. Without being called upon the Niue Islanders have enthusiastically sent away with the New Zealand forces 148 men, Rarotonga 308, the Gilbert Islands 25, and Fiji a platoon. The New Zealand Maoris maintain a full battalion at the front out of their population of 49,000.

Sir Walter Raleigh is generally credited with having introduced both the potato and tobacco into England, and every school-boy has read of how his Irish serving-man threw water over him on discovering him smoking in the garden of his house at Youghal (says the Westminster Gazette).

But there is a fair amount of evidence to show that potatoes and tobacco were known this side of the Atlantic some years before Sir Walter Raleigh popularised them, and in all probability Sir Francis Drake was the first to bring the tuber that is ''doing its bit'' in the war from the New World.

A Wellington Times reporter was informed by the Defence authorities that a notification had been received from the Admiralty stating that the censorship in regard to the publishing of particulars and names of hospital ships and ships carrying large bodies of troops had been removed.

During the war period a regulation was in force prohibiting the publication of the name of a hospital or troop ship or the movements of these vessels. This regulation has now been withdrawn.