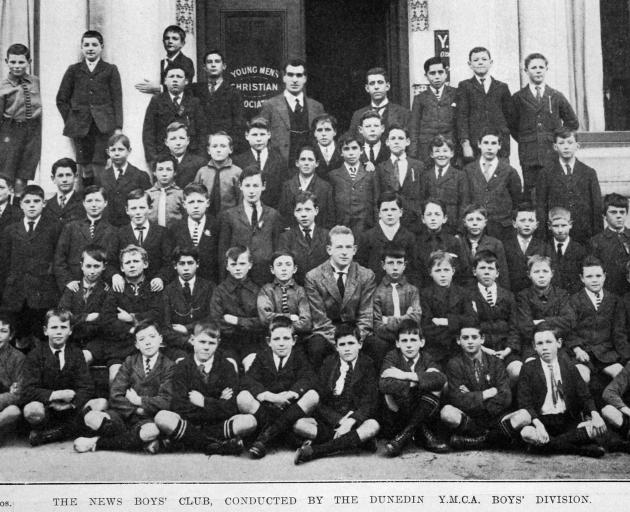 The YMCA’s newsboys’ club. — Otago Witness, 13.9.1921.
Few people in Dunedin realise that over 100 boys sell either the morning or evening paper every day in Dunedin.

For the past year the staff of the YMCA Boys’ Division has conducted a club for the newsboys every Tuesday night. The club started in a small way, but news soon spread and these boys, true to their trade, soon had a membership of 100.

Competitions and games, athletics, swimming, gymnastics, etc, have been conducted for special trophies. The boys are divided into two groups, named Pakeha and Koura respectively, and special points are awarded to individuals doing special things for the sake of the club. Every type of boy can be found among them, and the leaders have a difficult task to fit in a programme in two hours that is enjoyed by all the boys.

Christchurch: A Dunedin motorist moved, after a fortnight’s stay in Christchurch, to criticise strongly in a letter to the Sun the manners and customs of the local motorists. He writes: ‘‘Christchurch is a motorists’ paradise, where they may drive where and how they like, and leave their old ’buses anywhere for any length of time without molestation. As one who comes from more regulated parts, I find that ‘speedometer’ is not in the motorist’s vocabulary. Motorists may please themselves, so far as is practicable, as to what speed is developed. There is gone from motoring in Canterbury the old time courtesy of the road.

‘‘Canterbury has more motorists uneducated to the laws of the road and common sense generally than has any other province. However, I take it your persons who frame the by-laws, your police and inspectors (have you any?) and your motoring organisations are responsible chiefly.

‘‘Driving at night time is rendered hazardous by road hogs through excessive speed, dazzling headlamps, no tail light, and vehicles — hundreds of them — without lights at all.

Pedestrians may do as they wish, and your otherwise very excellent city square is a positive death-trap. Who is responsible for so many undesirable
features about motoring in Christchurch?”

The motoring editor of the Sun replies that motorists themselves are largely to blame.

The police are not paid for acting as “traffic cops” in Christchurch, as is done in Wellington. There are only two traffic inspectors. No one seems to care.

The work of removing Milton Methodist Church to its new site on the adjoining section has now been completed by the contractors, Messrs Watson, Rhodes and Son (says the Bruce Herald). The building, which is 50 feet long, was bodily lifted by jacks onto long stringers with several iron rollers underneath. It was then easily pulled back the requisite distance (150 ft) by means of two winches.

A visit to the Western and Catlins districts by the secretary of the Sawmillers’ Union, Mr T. O’Byrne, showed that the mills in those districts were doing fairly well. In the Western District only three mills had been closed down, while all the mills in the Catlins district were working whenever weather permitted. There was general quietness in the trade, but comparatively few men were out of work.

I object to your Dunedin correspondent's description of Cant erbri driving. The Square is it? What about your Eight Sided eh? I turned right off Stuart Street toward the dodgy sounding 'Big' Daddy's, to find vehicles coming strait at me.