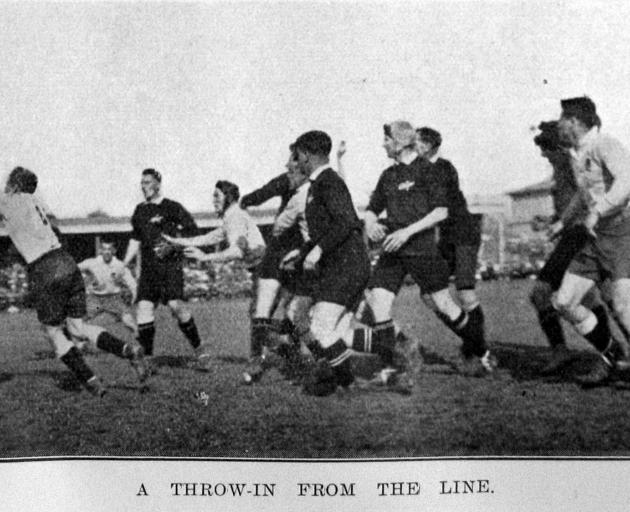 A throw-in from the line during the All Blacks v New South Wales rugby match, September 3, 1921. — Otago Witness, 13.9.1921.
A crowd of some 10,100 people witnessed this  afternoon at Lancaster Park, in the  most perfect weather imaginable, an All Black team sustain the severest defeat by the New South Wales representatives that the New Zealand international side has ever received.
Doubts  were entertained in the city yesterday by rugby experts as to whether our men would hold their own against the fast, heavy players from the other side, who had shown themselves in matches already played in the dominion to be keen adepts in the game as played by the famous original All Blacks. The New Zealand team had been subject to several eleventh-hour changes, with the object of strengthening it, and on paper the team that took the field today was better than the original selection. Probably the delay on the selectors’ part in making the final choice, which resulted in the chosen fifteen being unable to have one complete practice together, may have been a factor in the disappointing exhibition today; but it would only be clouding the actual position to attach very much importance to that factor.
The game was remarkable for the number of free-kicks allowed, the majority being against the visitors, whose weakness for taking the ball offside marred an otherwise excellent display of rugby. The crowd was most impartial, but in the last 15 minutes large numbers of sorely disappointed spectators left the ground. At the close the victors were loudly cheered, and a number of them were carried shoulder-high to the pavilion.
Traders stir dissent in Samoa
That the discontent in Samoa is being deliberately engineered by a section of the white traders, with the underlying motive of the restoration of the licensing of the liquor trade, was the candid opinion expressed by Professor Macmillan Brown, who returned to Auckland from the islands by the Makura on Saturday. He contended that the grievances in the administration were only a pretext for fanning the flame of discontent, and that the beach people were exploiting the sympathy of the native chiefs. The petition that was forwarded to the King was the result of their instrumentality. The dissatisfied ones recognised that the plea of the natives would carry more weight than their own, as it is the Mother Country’s unswerving policy to treat the natives of any acquired territory justly. It had been stated that the natives feel it an indignity to be governed by a dominion, rather than the Empire, and this view was being emphasised to the native mind.
’Dimming’ headlights debate
There is evidently a sharp conflict of opinion between North and South Island motorists on the question of  “dimming” headlights. South Island motorists’ opinion appears to strongly favour “dimming” while the New Zealand (North Island) Automobile Association last week resolved to recommend the discontinuance of the practice known as “dimming” of headlights as being more dangerous than the use of the full light. Recent magisterial decisions point to a definite discouragement of dazzling headlights, and in at least one case the use of such lights was held to constitute contributory negligence, and deprived the owner of the damaged car from obtaining redress. More will doubtless be heard on this.
— By Accelerator
Comment now