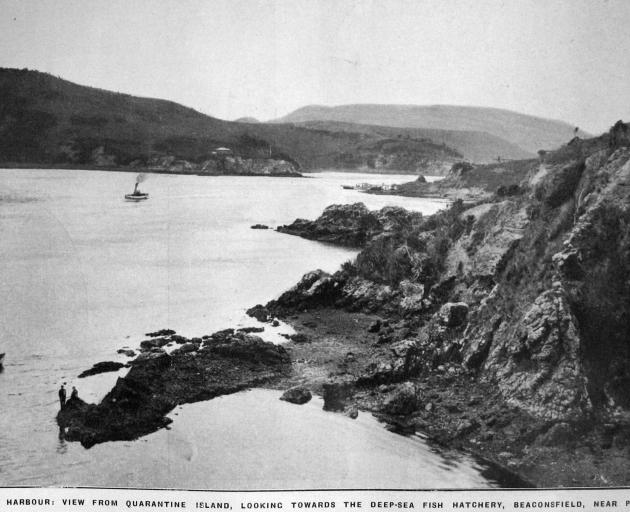 A view from Quarantine Island, Otago Harbour, looking towards the deep-sea fish hatchery at Beaconsfield, near Portobello. — Otago Witness, 16.8.1921
An illustrated lecture on “Our Fishes and Other Sea Life'’ was given by the Hon G.M. Thomson in the Medical School lecture room, King street, last night.

With the aid of a large scale map he showed how absurd was the suggestion that trawlers working from Port Chalmers could seriously affect the supply of fish in the neighbourhood, confined as the trawlers were to the shallow area in which they could reach the bottom. About 40 to 45 different kinds of fish were to be seen in local fish shops at different times, and of these about 25 varieties were common.

The lecturer then had thrown on the screen a number of interesting views of the fish hatcheries at Portobello, and later of such fish as the New Zealand bream, the hoki, the teraki, barracouta, lemon sole, common sand flounder, common sole, brill, turbot, sea perch, pigfish, blue cad crabs, crayfish, lobsters, shore hoppers, and others.

Many interesting facts were given about these fish, as, for instance, the turbot, with its wonderful power of swiftly changing colour in harmony with its surroundings. He stated that of 195 turbot brought out to Portobello eight years ago, only eight had been lost, owing to the extreme care and cleanliness with which they had been handled. They were now about 2 feet long, but they would not spawn. It appeared that they had to get into deep water in order to spawn, and so they had all been turned out except 14 that were kept for visitors to look at. In concluding, he expressed the opinion that the development of our fisheries ought to be much more seriously supported by the Government than it was.

London, August 16: Despite a downpour of rain, enormous crowds waited outside the Dublin Mansion House for the opening of the Dail Eireann. Traffic was suspended. Large contingents of the Irish republican army held the streets for a radius of one hundred yards. Mr De Valera, in a lengthy speech, reiterated Ireland’s claim to separation from Great Britain. He said that the only government which the people recognised was the Dail Eireann Ministry.

“Only on the basis of the recognition of a republic can we deal with any foreign power,” he said. “We stand by that principle, and mean to die for it if necessary.” The British proposals were not just, and because of that he had sent his reply. The Dail Eireann assembled in the room of the Mansion House where Parnell made some of his great orations for Irish freedom. Parnell’s portrait hung above the Speaker's chair. Nearly 2000 persons were present in the galleries, including prominent lawyers, clergymen, medical men, and businessmen.

A new machine for splitting herrings threatens the custom of taking Scottish girls to the east coast of England in the autumn for the kippering industry. It is claimed that the machine, which is electrically driven, can split 2300 herrings an hour. The fish are fed into pockets of the machine and split accurately by a revolving circular knife. The cleaning is an equally simple operation. A demonstration of the machine was given at Lowestoft recently and it is stated that several firms claim that with it they can considerably reduce labour costs and secure a bigger output.

It was about 100 years ago that the Grayling was fished out of NZ waters.