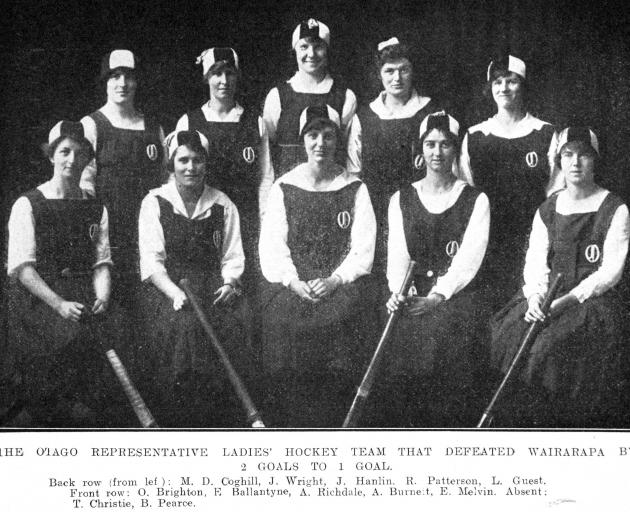 The Otago hockey team that defeated Wairarapa 2-1 (from left; back row) M.D.Coghill, J.Wright, J. Hanlin, R. Patterson, L. Guest; (front) O. Brighton, E. Ballantyne, A. Richdale, A. Burnet, E. Melvin. Absent: T. Christie, B. Pearce. — Otago Witness, 6.9.1921.
Strangely enough the ladies’ hockey match, played at the Caledonian Ground yesterday afternoon between Otago and Wairarapa, was the first match of the kind that has ever been played in Dunedin against a North Island team.

As far as could be judged by their previous records the teams were of just about equal strength, and a keen and even contest was anticipated.

The day was fine and bright, with a cold north-easterly wind blowing. A large part of the attendance was made up of schoolgirls from St Hilda’s. Wairarapa has been having a most successful tour; their only defeat prior to yesterday being at the hands of Southland.

The game did not prove to be a very interesting one or a particularly good exhibition of hockey. Both sides lacked combination, and the players have still to learn the importance of keeping their places.

The Otago girls were undoubtedly the stronger team of the two and if they had had some good shots among the forwards they might have compiled a substantial score.

The game was controlled by Messrs S.L. Scarell and R.S. Wallace. The final score was Otago 2, Wairarapa 1.

The destruction, with sad loss of life of the great airship R38 is one of those occurrences which leave an impression beyond the power of words to express. The huge dirigible, with a complement of just on 50 persons, was seen at one moment by interested watchers cruising serenely over the town of Hull, and at the next falling in headlong ruin, amid smoke and flame into the waters of the Humber. The worst feature of the disaster is the smallness of the number of survivors.

Among those who met death in circumstances so tragic were officers of distinction in the aerial service, both British and American, for apparently the R38 had on board the American crew which was being trained to take the vessel across the Atlantic.

The tragedy of which the Humber has been the scene is not likely to revive in the British Government any enthusiasm for the maintenance of an airship fleet.

The visit of the steamship Eastern Planet to Dunedin has aroused a considerable amount of interest in wireless telegraphy by the continuous wave method and valve transmission, and also in wireless telephony. The steamer is fitted with a 2kW transmitter set, which has been transmitting distances up to 4000 miles. In addition to the regular sets, the operators have fitted up a valve transmission set of similar design to that proposed by the Parliamentary committee of the House of Commons for the Imperial chain of long- distance wireless stations. It is, of course, only a small powered set of half a kilowatt.

A wireless telephone is operated with the same apparatus. The operators on the Eastern Planet express the greatest satisfaction that they have been able to carry out telephone tests with only half kW over a distance of 250 miles. When the ship was off Timaru, gramophone selections were played.

These were picked up by observers in Christchurch and Timaru, and also by Mr R.W.P. Lye, telegraph engineer, Dunedin, and by the wireless station at Awarua.