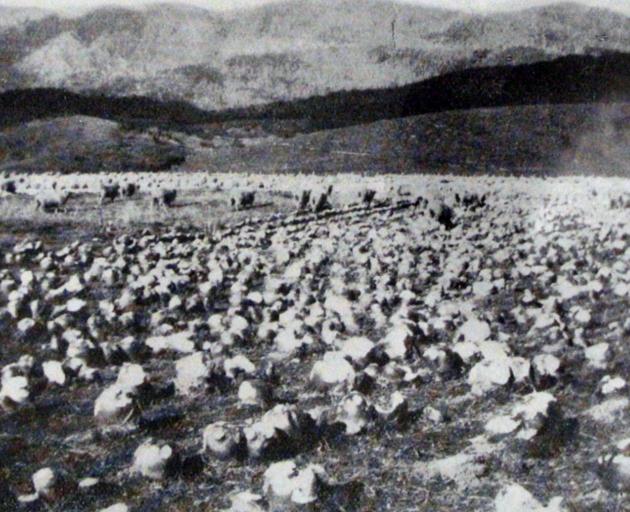 Sheep graze on turnips at Glenaray station, near Waikaia, Southland. — Otago Witness, 13.12.1921
Dr Valintine, Director-general of Health, who is visiting the South Island with a view of consulting with local bodies in respect to precautions being taken to prevent the introduction of the bubonic plague, had an interview with the Mayor (Mr J.S. Douglas) while in Dunedin.Dr Valintine said that he was not quite satisfied that enough precautions were being taken to cope with the destruction of rats, in view of the fact that they were known to be the means of conveying the plague. He asked if the Mayor could see his way to put on two rat catchers in Dunedin, and the Mayor at once agreed to the request. The men will be paid about 12 shillings per day and about 3 pence per rat in addition. Dr Valintine suggested that there should be more sanitary inspectors in the city, but the  Mayor pointed out that the council was going to use the services of the inspectors in the Drainage Board, the water, and rangers’ departments, etc., to co-operate with the sanitary department and seeing that yards are kept clean, and said that any nuisance would be at once reported to the city authorities.

Dr Valentine was evidently satisfied with the evidence of carefulness being displayed by the city.

Not for many years has feed been so plentiful in the Western District (says the Star). On every farm are to be seen splendid paddocks of grass, while oats and turnips are looking well.

New Zealand and the Pacific

At a meeting of the Otago Officers’ Club on Wednesday evening Captain D. McRae, of Invercargill, lectured on the problem of the Pacific. He said that most of the islands were inhabited by a collection of polyglot nations, and the study of their life and the conditions of life were of the greatest interest and importance to the people in New Zealand. Australia, America, and Japan had the greatest interest in the Pacific, and in tracing the history of the British, American, and afterwards of the German entry into the Pacific, he gave some most interesting particulars. Our idea, he considered now especially in view of the developments in quite a recent period, must be to have an effective policy there which would be agreeable both to ourselves and our neighbours. He regretted that young people in the schools were not educated better with regard to the possessions over which New Zealand and Australia had a mandate.

Sir Alfred Robin, in thanking the lecturer, said that when he was at the Imperial War Office he searched for a good map of the Pacific and ultimately unearthed  one at the office of one of the big insurance companies. He agreed that to bring before the young people the value of the islands of the Pacific, their population and their value was of the greatest importance, and ought to be done.

When the first Canadian thistles appeared in the Western District about the year 1879 great consternation prevailed amongst farmers on the river flats (says the Star). Every means was used to exterminate them, and for a time they were partly successful. Some farmers have kept them in check, but it must be a source of worry to those when neighbours take no trouble to deal with them.

One has only to look at certain properties on the Jacobs River flat between Thornbury and Fairfax to get an illustration of neglect in this respect. — ODT, 16.12.1921.