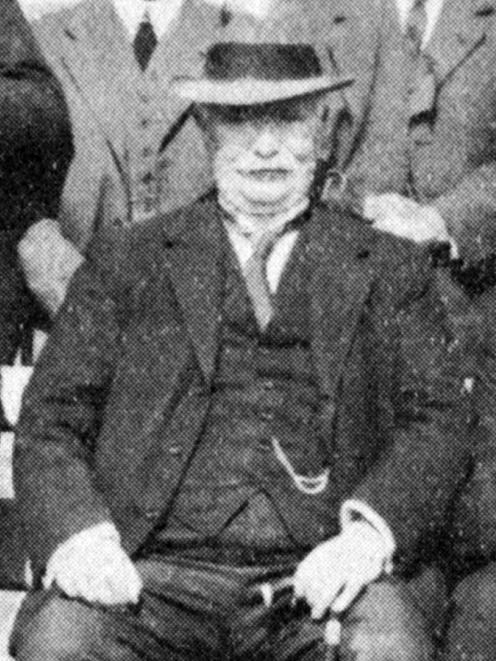 Prime Minister the Rt Hon Mr Massey. — Otago Witness, 15.2.1921.
It seems reasonable to interpret Mr Massey’s allusions to the appointment of a new Minister as ‘‘a Cabinet matter’’ in the sense that, prior to announcing the appointment, he proposes to consult his colleagues with reference to the redistribution of portfolios — a step necessitated by his approaching visit to Great Britain and by the absence of Sir William Herries from the dominion, even if the Government was not to be strengthened by the inclusion of a new member.

It is now generally understood throughout the dominion that Mr Downie Stewart has accepted the offer of a seat in the Cabinet. When the public intimation is made to this effect, it will be received with a great deal of satisfaction. The acceptance by him of a seat in the Government should to some extent relieve Mr Massey of a difficulty which the allocation of portfolios during his absence at the Imperial Conference might otherwise present. Were it not for the fact that Mr Massey has already arranged for the transference, during his absence, of the office of Minister of Finance to Sir Francis Bell, who is also to be the Acting Prime Minister, the qualifications possessed by Mr Stewart, which were recognised in his appointment last session as chairman of the Public Accounts Committee of the House of Representatives, might have been held to indicate him as a suitable appointee to this office.

The Otago University Council had placed before it at its meeting yesterday afternoon particulars of a very valuable gift that has been made to it by Mr Justice Chapman and his family. Mr Justice Chapman has placed at its disposal his extensive and most valuable ethnographic collection, the full significance of which may be gathered from the accompanying letter from Mr H.D. Skinner, assistant curator of the University Museum. The council took the obvious course of accepting the gift with hearty and grateful thanks to the generous donor. Mr Skinner’s letter said: “Judge Chapman’s collection is one of the most important private collections in New Zealand. It includes three adzes found by Judge Chapman below the moa-bone bed at Shag River, adzes which demonstrate that the first inhabitants of Otago were Polynesian at any rate in material culture.”

A section in the Health Act, as amended and consolidated during the last Parliamentary session, will be of great advantage to the police or other authorities under whose notice cases of aged, destitute, or infirm persons living without proper care and attention may be brought. The Act gives the authorities power to take such a person before a magistrate in order that an order of committal to some suitable home or institution may be made, and, further, to enforce compliance with such order as may be made. In the past many difficult cases have cropped up, both of aged people who refused to go to an institution, and, strangely enough, of difficulties which have arisen through the refusal of the authorities in charge of charitable or other institutions to take such persons under their care.

Sir, The residents of South Dunedin have a grievance against the City Corporation in the fact that it allows cattle to be driven through Macandrew road, which is 25 feet wide, to the Burnside saleyards. That the practice is dangerous is shown by the fact that there are three public schools and a large Roman Catholic church in the street, and I have noticed when the congregation comes out from early Mass at the church the cattle cause the people to scatter in all directions. I should like to know why the City Corporation should authorise the stock owners to drive cattle through this narrow street, when Bridgeman street, 60ft in width, with the railway embankment on one side, and a few houses on the other, is available. Better still, why not keep on the main road and from thence to the Belt?  If the drovers were licensed, each licence bearing a number, and the number being shown on the saddle cloth, we should know whom to prosecute for such damage to fences as has been suffered by many, including myself. — I am, etc, J. Downey