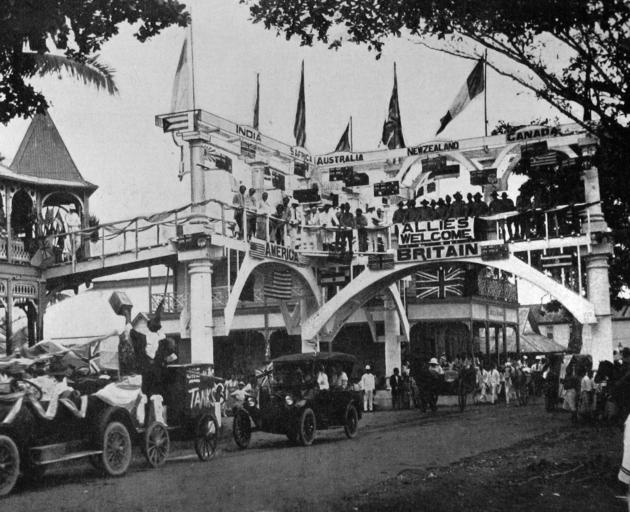 The striking peace arch at Apia, Samoa, built to impress the Samoans previously under German authority. The structure's four main arches represent Britain, the USA, France and Belgium and the smaller ones above represent countries in sympathy with the Allies. - Otago Witness, 21.10.1919.
It is obvious that the attempt to arrive at a definite policy which it shall follow in respect of the treatment of military defaulters is presenting some difficulty to the Dunedin City Council.

It is entitled to a certain amount of sympathy in its dilemma which has originated in the issue of a taxi-cab driver's licence to a man who is described as a military defaulter and ''shirker''.

On the one hand, the feeling that must be entertained by all sections of the community outside the ranks of the New Zealand Labour Party, is that very little consideration indeed is due to any physically fit man who thinks so little of his country as not to consider it worth fighting for.

On the other hand it is to be recognised that, unless the military defaulters are to be altogether excluded from the country, it is necessary that the opportunity shall be offered to them to make an honest living. Those who have not escaped arrest have, in fact, paid part of the penalty which has been prescribed for their refusal to obey the law.

They are, moreover, subject at the present time to another part of their penalty in the deprivation of the civil rights. This deprivation, which prevents them from holding any office or employment in the service of the Crown or of any local authority and from enjoying and exercising the privileges of an elector, operates for a term of ten years.

In terms of the law, therefore, it is impossible for any military defaulter to be employed by a local body like the City Council for this period.

The view that a man who has already suffered a measure of punishment through the temporary loss of his liberty should be permanently denied a chance to earn his living in an occupation for which he regards himself as suited and in which his success is entirely dependent on the support he receives from the public hardly appeals to the British sense of justice.

Sir, - The most casual observer cannot be blind to the fact that an increasing number of our growing girls and boys spend several hours every evening in patrolling the streets; the obvious inference being that their homes have ceased to attract them.

The remedy for this clearly undesirable state of things is to make other and more wholesome provision for the social life and enjoyment of our boys and girls - the men and women of the future with whom the destiny of this young nation largely rests.

A scheme has been drawn up for renting a clubroom in the heart of the city and for fitting it suitably and furnishing it adequately, to serve as a social centre where the young people may entertain themselves or be entertained as occasion may offer. The estimated cost of fitting and furnishing and rent and working expenses for the first year is 300, which modest amount should be subscribed without difficulty.

Whilst taking an observation of the sun on a recent morning, the Hon. Director of the Wanganui Astronomical Society (Mr J. T. Ward) found a variety of fine solar prominences; amongst them one of considerable interest.

Its height was approximately 140,000 miles and was shaped like a long, almost parallel, shaft of light with a branching top. Besides this there were several other fine prominences ranging from 40,000 to 60,000 miles.

Taken altogether, the activity of the hydrogen flames was quite abnormal.