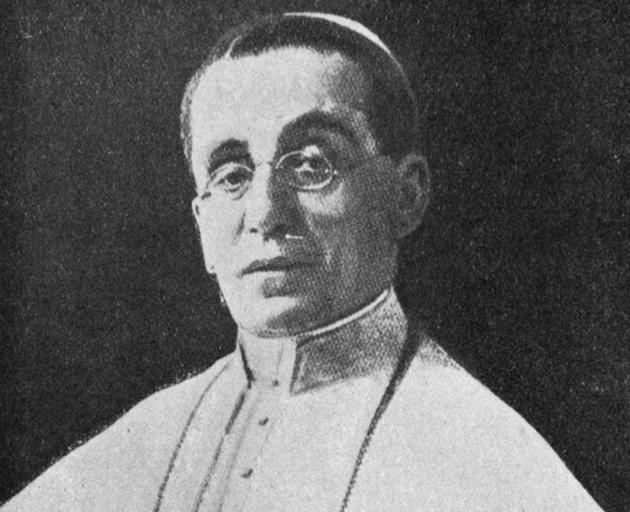 The late Pope Benedict XV. — Otago Witness, 31.1.1922
A telegram from Rome states that Extreme Unction was administered at 2 in the morning. Early in the forenoon, after an hour’s sleep, the Pope took liquid refreshment, and revived the faintest hope in regard to his recovery. His lucidity during the early part of the day was a remarkable feature of his illness. He became delirious at noon, insisting on rising to resume work. Later a state of coma commenced, from which he never regained consciousness. Death occurred at 4.45pm Rome time.

Giacomo Della Chiosa was elected Pope on September 3, 1914, in succession to Pius X. He took the name of Benedict XV.

With the exception of Pius IX, who was elected Pope at the age of 54, Benedict XV was one of the youngest pontiffs of modern times, not having completed his sixtieth year at the time of his election.

Yesterday being the 100th anniversary of the inauguration of the work of the Methodist Church in New Zealand, special reference was made to the event at both services at Trinity Church by the Rev M.A. Rugby Pratt. At the service, after alluding to the coming of the first missionary, the Rev Samuel Leigh, Mr Pratt spoke of the position of the Methodist Church today. It had in New Zealand some 121,000 adherents, with 70,393 returned as attendants on public worship. There were 29,154 scholars having their lives shaped by a staff of 3,369 teachers, while some 5,050 younger children were on the cradle roll. In the Bible classes  5,545 young men and women gathered and 3,463 were found in Wesley Guilds and Christian Endeavour societies.

They had 972 preaching places, each a vitalising influence. A staff of 192 ministers, 52 home missionaries,16 deaconesses and 815 lay preachers was pouring a stream of spiritual energy week by week into the country's life. Those were figures, said Mr Pratt, that not only evoked gratitude, but constituted a challenge. With such resources at command they should have done more, but wondrous things were yet possible if they took their religion seriously.

The Otago Centre of the New Zealand Amateur Athletic Association was most unfortunate as regards the weather for the sports meeting on Saturday. The visit of such class runners as the South Africans — Ayres, Oosterlaak and Bukes have both represented South Africa in the Olympic games — had created a great deal of interest, and had the weather been fine there would have been a great crowd at the Caledonian ground. A thick rain coming in from the sea, commenced to fall at about 5 o'clock in the morning and it continued to fall right through the afternoon. The ground as a result was heavy, and even allowing that the runners had a light wind behind them, times recorded were fast under the circumstances. — ODT, 23,1.1922.

I feel better now! Well, must be up for the Pontiffing. There's an encyclical to do, and the Methos are meeting behind hedgerows again.