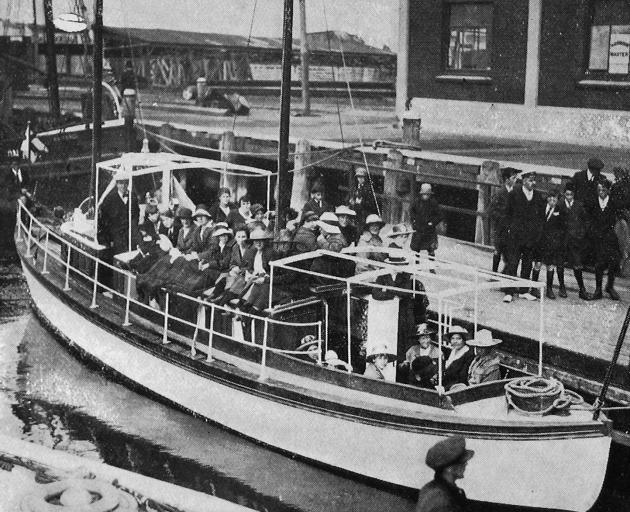 A launch load of children from orphanages leaving Dunedin wharf for the annual picnic given by the Otago Yachting and Motor Launch Club. — Otago Witness, 30.3.1920.
Owing to the kindness of Mr P. R. Sargood the Boy and Girl Scouts were able to spend a very pleasant afternoon on his property at Newington yesterday.

Mr Sargood, who is a member of the Council of the Dominion Boy Scouts, and who has always evinced the liveliest interest in the scout movement, some time ago
offered to throw his grounds open for use on an afternoon to be fixed upon, and yesterday was chosen as a fitting opportunity to give the youngsters an outing.  While the desire was to provide the boys and girls with some amusement there were other objects in view, which, Mr Sargood explained at the end of the afternoon, were to popularise and make more widely known the Boy Scout and Girl Peace Scout movement.  He also pointed out the necessity for funds to carry on the movement with.  The most tangible evidence of this object was to be seen in the shape of a large marquee, where tea and cake, iced creams, and a variety of light refreshments were dispensed at modest cost, and found ready customers.  Flowers were another source from which assistance of a financial kind was derived. Altogether there were between 150 and 200 Boy and Girl Scouts present, and while they all had the free run of Mr Sargood's beautiful grounds it was exceedingly pleasant to notice that there was no indication of a broken shrub or a trampled flower bed.

Yesterday was the seventy-second anniversary of the Province of Otago, which dates from the arrival at Port Chalmers of the John Wickliffe, a small sailing vessel of 662 tons, on March 23, 1848. The ship took 119 days to make the voyage, leaving Gravesend on November 24, 1847.  Her passengers comprised 25 married persons, 19 single men, eight single women, 10 boys, and 14 girls.  The weather was somewhat cold yesterday, the day being observed as a general holiday. The principle attraction during the day was the lawn tennis contest between Otago and the English Davis Cup players, but the bowling greens and cricket fields attracted many devotees, while a large number of parties visited their favourite picnic grounds.

It is noteworthy that at the recent W.C.T.U. Convention emphasis was laid on the profound effect on the adolescent girl of educational influences outside the home and school, and the fact that the chances for good education were, in the majority of instances, so casual.  What was wanted, it was stated, was the provision of social club centres for better recreation, and for the discussion of industrial and other questions that should stimulate interest in community life.  A beginning has already been made in Dunedin by the establishment of a Girls' Social Centre in a building opposite the General Post Office.  A large room, attractively furnished, has been secured through the efforts of a small committee of men and women interested in this matter, which girls may use as their own sitting room, and to which, on certain nights, they may invite their boyfriends.  A programme of games or other entertainment will be regularly provided under proper supervision.  There will be no compulsory membership, but any girls who so desire will organise into a club, which shall be self-governing and have the right to a voice in the conduct of the social centre. — ODT, 24.3.1920