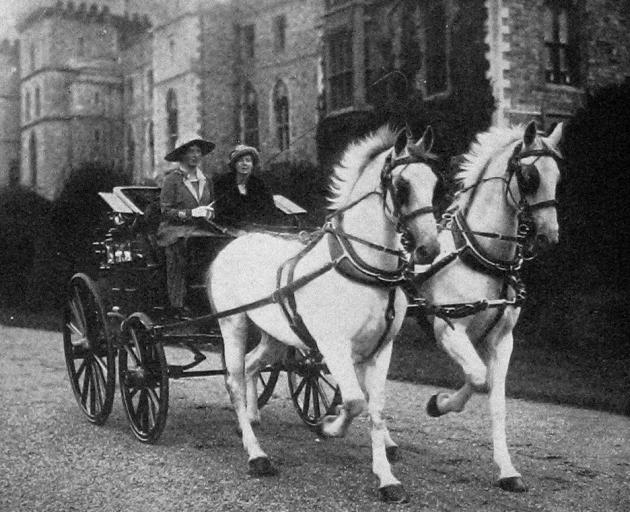 Princess Mary driving her beautiful spirited white horses through the grounds of Windsor Castle, accompanied by the Queen's maid of honour. - Otago Witness, 11.12.1918
A small party which went after a big pig that had been making himself a nuisance had a quarter of an hour or so packed with incident at the Stone House up the Reaby Gorge last week (the Mataura Ensign reports).

The dogs bailed up the pig and the leader of the party went forward with an axe and aimed a blow at the boar which would have killed an elephant but glanced off the animal's head and merely made him angry. The boar shook off the dogs, ''downed'' his human enemy, and used his tusks on him with energy, making several big gashes in his legs and one in his head.

The shepherd went to the rescue, but met with no better fate. As the boar rushed him he lunged with his right, the attack being met by the outlaw impounding the hand in his mouth, and the shepherd also had a leg badly ripped.

A third member of the party achieved more success, driving a bayonet into the animal's body repeatedly; but even he did not escape scathless, being cut about the hands. The pig, despite his wounds, made off at a great rate, and the hunters had to go to Gore for surgical aid and attention.

''When the mortality bill of these few weeks comes to be reckoned up, we shall probably find that this pestilence in three weeks' time claimed nearly as many dead from New Zealand as the war has claimed in four years,'' said the Rev. Dr Gibb at Wellington on Sunday night.

''We have learned the lesson to our bitter cost. The epidemic swept away temporarily many barriers in Wellington. For a brief period in the city there were no rich and poor, society and non-society, cultured and ignorant. For that brief period there were only two classes of people - those who were suffering from the disease and those who had escaped it.''

One proof of the rapid disappearance of the epidemic is the absence of news. Matters are quickly assuming the position of five weeks ago, about which time the epidemic first appeared.

In all directions there is an abundance of evidence that the epidemic is rapidly making its exit, due, it may be, to a cold, blustering climate that is often ''growled'' at, and most certainly attributable in a generous measure to the supreme efforts voluntarily made by a numerous section of the community.

The people have been left to help themselves very much after the established custom, and they have helped themselves. If they had not the trouble might have continued for many more weeks.

In New Zealand divorce is now only possible on account of misconduct or because of desertion for a long period. Here, the restitution of the conjugal rights system, which New Zealand abandoned, is in active operation. It is so easy, and is not surrounded by the painful publicity attending other forms of divorce.

A person asks that the other party to the marriage be ordered to restore conjugal rights. The order is issued, to be complied with within 21 days. If it is not complied with in that period the applicant asks for divorce, and a decree nisi, returnable in six months, is generally issued.

A long period of desertion, also, is not asked for, and advertisement may be substituted for personal services in desertion cases. As a result, fully half the divorce petitions are based on failure to restore conjugal rights or on desertion.