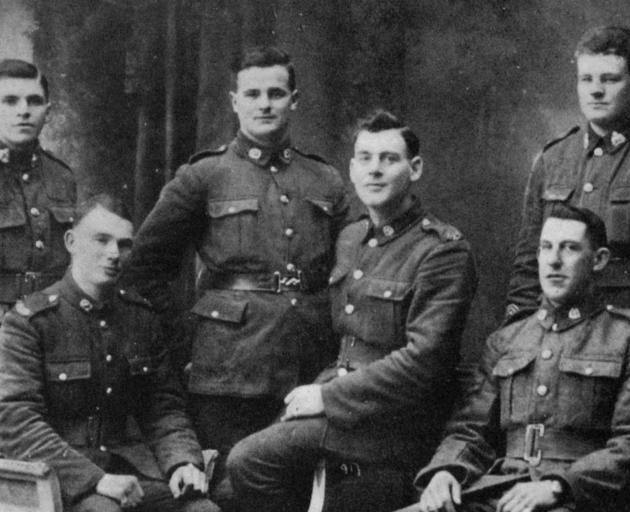 Southland and Otago men in Cologne, Germany. Standing (from left): Lance-corporal D. Stark (Waikoikoi), Private W. Scarlett (Otamita), Private A. McIntyre (Benio). Sitting: Private J. McIntyre (Maitland), Private A. Johnston (Waikaka Valley), Corporal W. Chittock (Waikaka Valley). - Otago Witness, 9.4.1919.
The results of the referendum on the prohibition issue, although they are not complete, are sufficiently so to show that the decision of the electors, whose votes have so far been counted, is in favour of trying the experiment of banishing the liquor trade from the dominion.

The returns from a certain number of isolated polling places have yet to be added to those which are published this morning, there are some thousands of absent voters' papers to be counted, and the result of the poll of members of the Expeditionary Forces will, it seems, not be publicly known for a few weeks yet.

How the later returns will affect the final result must be a matter of conjecture. It is hardly to be anticipated that they will swell the majority in favour of prohibition. They may materially reduce it, and they may even reverse the result as at present ascertained.

The poll has so far been inconclusive. It seems probable that if there is to be a majority at all in favour of prohibition it will be a majority of a few thousand votes only. It would be absurd to pretend that a result such as this could anywhere be regarded with satisfaction.

If the country is to be committed at all to an experiment in prohibition it would be highly desirable that the majority in favour of such a course should be of substantial proportions.

Yesterday was the eventful day which is to decide whether New Zealand is to retain alcohol liquor or to go ''dry'', and the community forgot for the time its interest in Peace Conference news and other matters which are affecting the world, and concentrated its attention on the special licensing poll.

The fact that the soldiers' votes have yet to be counted makes it impossible to give the complete figures regarding the voting for the whole dominion.

The 34,341 soldiers' votes will, of course, after these figures, and the general opinion in town yesterday seemed to be that the soldiers would vote by a considerable majority for continuance.

The people of Dunedin still refuse to take their reading too seriously. The record of the last 12 months in the Public Library shows that fiction, especially of the lighter type, pays the authors far better than more serious matter, if demand for books is any indication of their financial return to the writers.

With the reading public of this city the popular novelist beats the professor hollow. In the adult lending library 176,020 volumes were issued during the year, and of that number 152,179 were works of fiction.

As this library contains 8960 books of fiction, each volume was, therefore, issued close on 20 times during the 12 months. Contrasting these figures with those for purely literary works, which stand fairly high in the list, it is found that each volume in the latter category was not issued quite three times during the year. The books circulated in the various other branches of reading were as follows:

History and travel, 9970; fine and useful arts, 4058; literature, 3131; biography, 2681; sociology, 1648; philosophy and religion, 1497; and natural science, 1064. In connection with the large amount of wear and tear to which works of fiction are subjected in their rapid interchange, the problem of keeping them presentable is one which occasions the librarian (Mr M'Ewan) a good deal of anxiety.