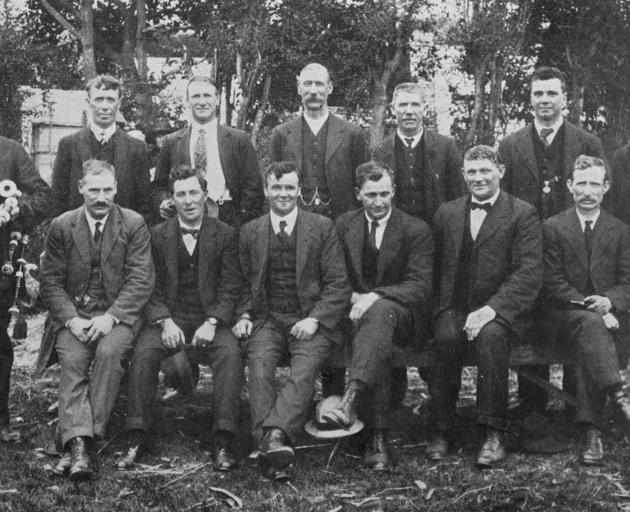 Members of the committee who organised and carried out the Dunedin and Port Chalmers watersiders’ picnic and baby show at Evansdale. Back row (from left): Piper D. MacArthur, Messrs H. Still, T. White, R. Lindsay, R. Pryde, W. Colthorpe, W. Dougherty. Front row: Messrs W. Burnside, C. Thetford, R. Reid (hon. secretary), N. Campbell (president), A. Campbell (secretary, union), E. Tiffany (vice-president). — Otago Witness, 3.2.1920.
As the effect of the voting upon the licensing issue in December last was made apparent shortly after the poll was taken, the recent publication of the exact figures, delayed owing to the tardy arrival of a few outstanding soldiers’ votes, was mainly of statistical interest.

But the contending parties now know exactly where they stand as the outcome of the latest expression of public feeling on the matter. The majority against prohibition amounted to 3372 votes.  State Purchase and Control received the support of 32,261 persons, and their vote, though paltry enough in relation to the aggregate vote of well over half a million, was sufficient, when cast into the balance, to more than wipe out the lead of 28,889 votes which Prohibition had secured over Continuance alone.

The figures as now presented would require a transfer of only some 1700 votes to the side of Prohibition to reverse the verdict.  The result of the referendum vote in April of last year was to give a majority of 10,362 votes to Continuance.  Before the year was out, however, the majority against Prohibition had shrunk by seven thousand votes in a heavier poll.

A comparison of the figures at the two polls shows that there was in December an increase of over 16,000 in the vote for Prohibition.  To this result the elimination of the provision for the payment of compensation to ‘‘the trade’’ — a provision which was a very sore point with many prohibitionists at the April poll — will have contributed.

The value of a wife adjudged

Sir Henry M’Cardie, in the Divorce Court, in an important considered judgement regarding the damages to which a husband was entitled when his wife was lured away, laid down that the damages should be based on the following considerations: (1) The actual value of a wife to a husband as a housekeeper or help in business; (2) proper compensation for injury to a husband's marital honour; (3) if a wife was of wanton disposition this lessened her value; (4) damages should not be given against a co-respondent who was not aware that a woman was married.

A wife who poses as single must be deemed valueless.  The court had no right to punish misconduct, and damages should not be punitive.  A woman could not sue another woman for taking her husband away.  The law held that a wife had no such right to a husband's services as a husband possessed regarding a wife’s.

Death of one of Otago’s first twins

It's a long cry from the arrival of the Philip Laing, with the first passengers for Otago, to the present time, but the late Mr Garret Clearwater, who passed away at his home in North Otautau last Friday, could almost span it (says the Standard).  Mr Clearwater was born at North-East Harbour, Dunedin, on 20th January, 1850, and, with his sister, the late Mrs T. Allan, are believed to be the first pair of twins born in Otago.

His mother, a daughter of the late Mr Stevenson, came out in the Philip Laing in 1848 with her people.  His father arrived in the dominion many years before in one of the whaling ships during the adventurous years when whaling was in operation off the New Zealand coast.

As a young man, he was a boatman between Broad Bay and Dunedin, and had some exciting experiences.  Thirty-six years ago he came to Southland, and for nearly 30 years he followed sawmilling.