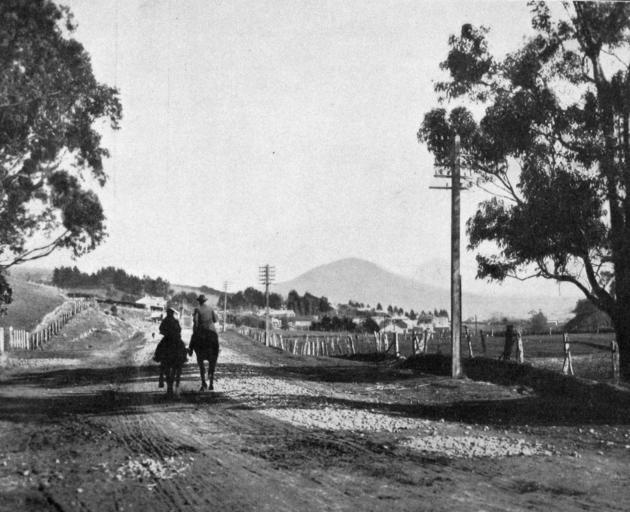 On the main south road, looking towards Saddle Hill, near Dunedin. — Otago Witness, 17.8.1920.
At the conclusion of a lecture last evening on “The Organisation of the Public Service”, Mr Peter Barr had something to say with regard to the popular conception of the service being generally infected with what is called the “government stroke”.

There were loafers in the service, doubtless, but he had no hesitation in saying that the average man was not very far different from that outside the service, and it was within his knowledge that in some departments men worked harder and for longer hours than in most other employments. The men who had risen to the top were as fine a class of men as would be found in the service of any bank or commercial institution, and whatever might be said as regard the rank and file, many of them were quite inadequately paid, and the scale was below that of men occupying positions of equal or even much less responsibility outside. Mr Barr added that he was no supporter of the high-paid head and low-paid underlying principle. The raising of the salaries of responsible offices would mean a general rise in the whole status of the service, and that was only right.

Christchurch: The recent discovery of gold at Gebbie’s Valley has led to the location of a goldfield which, it is believed, will yield a satisfactory return. A mining expert and mineralogist recently tracing the line of the reef discovered at Gebbie’s Valley found that it apparently runs out to sea off the Ninety Mile Beach, between Rakaia and Lake Ellesmere. Describing his investigations to a reporter of the Star, the expert stated that he had made enquiries of the old residents of the lake district and had learnt that the occurrence of gold on the beach had been known for many years, but no systematic means have been adopted to exploit it. Following directions given by some old fishermen he had struck the beach not far from the outlet of Lake Ellesmere, and had scraped up about 10 pounds of sand, and by a rough panning process had been surprised to find a “rattling good” tail of gold.

The following resolution from the Dunstan Presbytery has been forwarded by the Moderator to the Prime Minister and the Hon G.J. Anderson, Minister of Internal Affairs: “The Presbytery of Dunstan, believing that gambling is a growing evil in New Zealand, desires to express its hearty support of any legislation which will abolish the bookmaking evil. It also expresses the opinion that while the totalisator is perhaps the lesser evil of the two, by providing secure facilities it encourages and develops the gambling mania, and therefore should be totally suppressed. The Presbytery strongly protests against any increase in the number of racing permits, and strongly urges that they be decreased, believing that this so-called ‘sport of kings’ tends to moral and financial loss. No revenue derived from what involves economic waste and moral ruin can finally benefit our country.”

London: A subcommittee of the Royal Geographical Society is considering details of a proposed expedition to attempt to scale Mount Everest, via Tibet. It is anticipated that the undertaking will entail enormous difficulties and take a couple of years.  Mount Everest is the highest peak on the globe, its altitude being about 29000 ft.   — ODT, 11.8.1920.