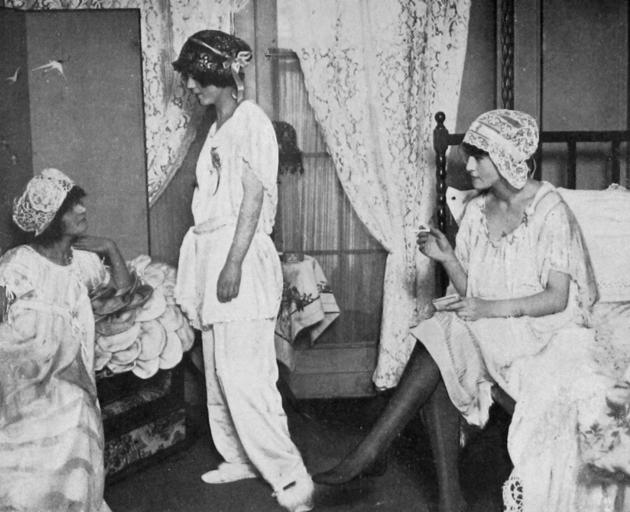 The latest idea in mannequin parades: a bedroom scene to show off the fashions in lingerie. — Otago Witness, 16.3.1920.
The heaviness of some of the fines which are now being imposed by magistrates upon landowners who are being prosecuted for failure to destroy rabbits on private land has had the effect of focussing public attention upon the unusual feature of the Rabbit Nuisance Act.

The magistrate before whom a prosecution is heard is not enabled to exercise any discretion whatever, except in respect of the penalty that is to be imposed.  The Act provides that ‘‘it shall be the duty of the owner or owners’’ on whom a notice is served requiring the immediate destruction of rabbits ‘‘forthwith to commence and thereafter to continue to do, to the satisfaction of the Inspector, all such acts as in the opinion of the Inspector may be necessary to destroy within the shortest time possible all rabbits that may be on the land mentioned in the notice.’’

It places, consequently, an arbitrary power in the hands of the inspector.  If that official comes into court and says that he is not satisfied with the steps which a landowner, whom he is prosecuting, has taken to destroy the rabbits on his land, the magistrate has no alternative to conviction of the defendant.

As Mr Mosley, S.M., said at Cromwell this week, it is a most extraordinary position in which the court is placed.  It is not, indeed, a position which any magistrate should be expected or required to occupy.  Inspectors appointed under the Rabbit Nuisance Act are not necessarily infallible, and the existence of some check upon a human tendency to fallibility on their part is certainly desirable.

While we hold this view strongly, we see no reason to be concerned respecting the imposition of heavy penalties upon landowners who are not exerting themselves to destroy the rabbits on their property.

That seemed to him wrong.  In other schools, although allowed in, the pupil teachers were not exactly made welcome.  He thought the head masters should be told that these rooms were for the benefit of the whole staff.  He knew that some of the teachers were feeling pretty sore about it.

Pupil teachers had been told that they must not have their lunch in the teachers' room.  He thought that should be put down.  He was not going to move a motion, but he trusted that a nod would be as good as a wink to those concerned and that there would be no need to take further action.

Light on the hardships of backblock life was given in a letter received by a county council.  The writer (a woman) said that she had had a hard year, and lost about 50 head of cattle.

She says: ‘‘We have no road, and we only used the main road about once a year. We are trying to sell our property, but the want of a road makes this impossible.  Could you make us a road, so that we can get our furniture (which is stored at Te Kuiti) brought in?  We are living in a small whare, with no floor, and have two wire mattresses placed on boxes for beds.  We even had to unscrew these in order to get them in.  We could not think of a sewing machine, as it could not be carried in.’’