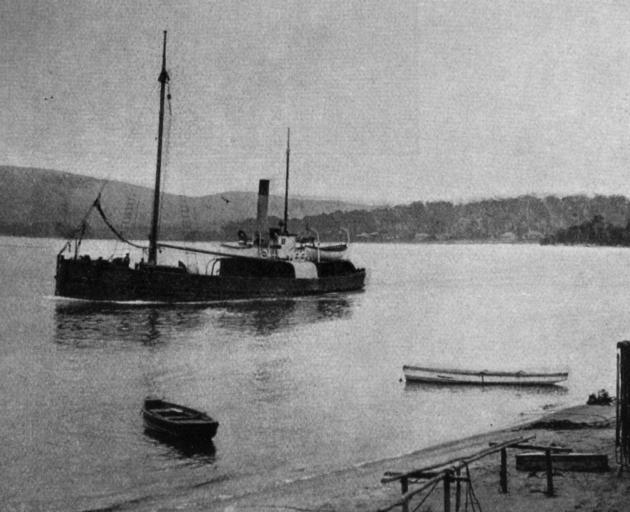 The SS Kotare leaving Pounawea for Dunedin with a cargo of timber. — Otago Witness, 30.3.1920.
The Railway Department has inaugurated a house building scheme on a large scale. The present programme involves the erection of 400 houses as a commencement.

The scheme involves the establishment of a factory equipped with modern machinery for cutting timber to standard lengths. This will enable rapid progress to be made with the construction of the houses. The houses will be built to standard type, and will be provided with modern conveniences.

A commencement has already been made with the erection of a number of houses at Kaiwarra to relieve the pressure in Wellington, where the housing problem is at present most acute. Twenty chains of road has been formed, 15 sites excavated, and the erection of 10 houses is in hand, some of them being well forward.

The plans of the New Zealand railway house show a compact arrangement of rooms built on the plan of an English house, with the rooms entering off a passage-way, and not entering off each other, which in the American houses is very common. The standard type being built at present contains kitchen, sitting-room, three bedrooms, bathroom, scullery, and washhouse with copper and tubs built in.

In addition an outhouse is provided for wood and coal. A hot and cold water service will be installed in each house, electric light will be provided wherever it is available, and each house will have, in addition to the lighting, a connection for an electric iron.

The resignation by Sir James Allen of the Bruce seat in the House of Representatives which, together with the resignation of his Ministerial offices, is necessitated by his acceptance of the position of High Commissioner, terminates a relationship of exceptional duration — in this dominion — as between member and constituency.

Twenty-eight years have elapsed since Sir James Allen was first returned for Bruce at a by-election. Sir James secured such a handsome majority on this occasion that the futility of opposition to him at the general election in 1893 was generally recognised, but from that time until the recent general election he always met with opposition, although, curiously enough, nobody ever opposed him more than once.

He was bound to be never without political enemies in a district which does not consist of homogenous elements and in which the town and rural populations are influenced by different schools of political thought.

Moreover, the fact that Sir James Allen occupied, throughout the whole of his connection with the Bruce electorate, a position of prominence in one of the political parties in the country made it of importance to those who differed from him that an effort should be made at election after election to wrest his seat from him.

The unsettled weather of the past few days moderated yesterday, and practically all the fishing fleet put to sea from Port Chalmers. Red cod were fairly plentiful, and of a rather larger size than usual.

The king-fish season is now going off. A fair number of sole and and flounders were caught well inshore. Four railway fish wagons conveyed the catch to the city, this including the early wagon which takes the fish consigned to country towns.