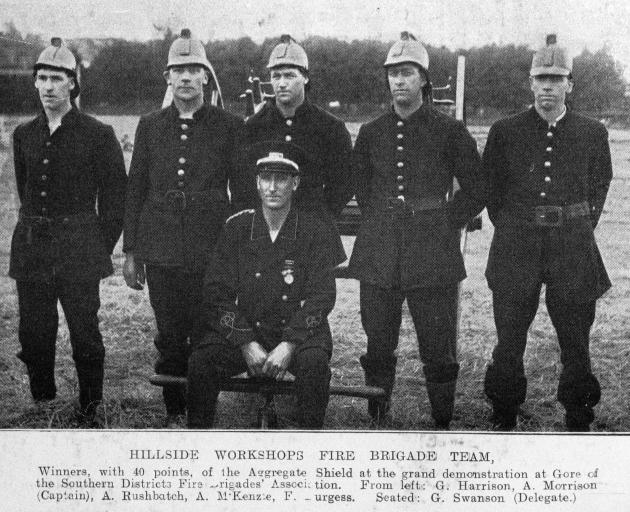 Competition was keen, and brigades from Oamaru, Hillside, St Kilda, Tapanui, Gore and Invercargill were represented. Hillside, the New  Zealand champions, had a day out, taking first place in every event.

This is the third occasion on which the Hillside brigade have won the South Districts Shield — firstly at Tapanui in 1918 and secondly at St Kilda in 1920.

There has been a falling off this year in the number of persons travelling by train during the Christmas season, more particularly as to long distances. There travelled to Wingatui races on Monday 4,333, as against 4,912 last year.

he decrease is due to some extent by the postponement of the Port Chalmers regatta, which accounted for about 1000 people last year, and a falling off of about 600 in the number who went to the two days’ racing at Wingatui this year.

here was also a fairly heavy falling off in the number of passengers who booked to the North Island, about 264 fewer persons going there this
year than last. Very heavy traffic was dealt with on the 22nd, 23rd, and 24th.

The ordinary holiday traffic north and south was well maintained. The traffic to Central Otago was fairly light, but southern traffic generally was good.

Business at the local tourist office has continued very brisk from the beginning of the holiday season until now, and the bookings have been most satisfactory to the department. Although  the office was exceptionally busy last season, the takings this year are several hundred pounds ahead of last year's total.

It is not at all surprising, however, that increases of the daily tariff on the Milford Track from 15 shillings to 22s 6d caused a considerable number of impending visitors to cancel their tours, and inquiries since have not been up to expectations.

The office reopened yesterday and had another busy day. Several parties of Australians were booked for the Milford trip.