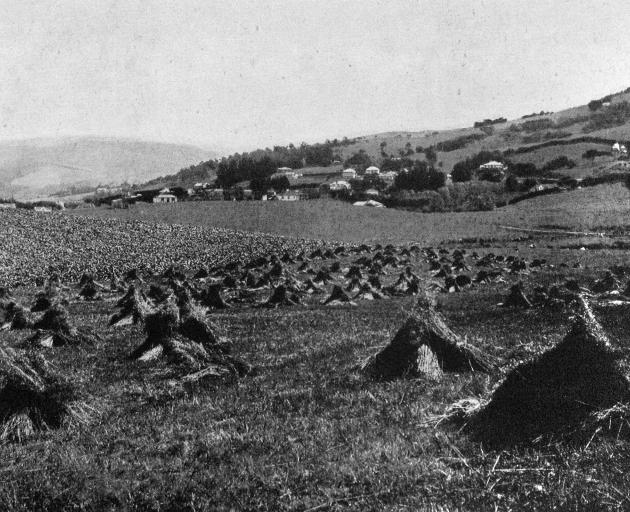 Stooked grain after harvest near Warrington, Otago. - Otago Witness, 12.3.1919.
The New Zealand Poultrymen's Conference opened yesterday. There was a large attendance of delegates, who were welcomed by the Mayor.

Addresses were given by the Countess of Liverpool and Mr Isitt, Dr Thacker, and Mr Witty (members of Parliament).

The Countess of Liverpool said that when she came to New Zealand she could not help being impressed at the quantity of work, indoor and outdoor, done by women here compared with other women in the Old Country.

Since the outbreak of the war, however, things had greatly changed in the Old Country, and women there now were doing wonderful work. In New Zealand women in the country districts also were working on the land in an unobtrusive way. They worked without the glamour of the limelight that surrounded the women workers at Home.

Returning soldiers were relieving some of them of the work, but they still gave attention to outdoor life, and that should be of particular advantage to the poultry industry.

She believed that poultry-keeping and fruit-growing could be profitably combined. She had not had time to study poultry-keeping in New Zealand, but she kept a few birds, and she had found them a source of great interest, and a valuable asset as well.

She always had felt New Zealand was wonderfully well endowed with many natural advantages for poultry people.

Field-marshal Sir Douglas Haig had a brilliant naval and military reception on arriving at Dover en route to London.

He was also greeted by tens of thousands of people on the sea-front.

The distinguished Field-marshal crossed aboard the Belgian hospital ship Jan Breydel, which was escorted by three destroyers. Well out at sea the Jan Breydel was met by six coastal motor-boats and many seaplanes and aeroplanes.

In choosing the ancient port of Dover for his first landing since the armistice was signed he followed the example of those other illustrious soldiers - Kitchener (who first touched English soil here after Khartoum) and Roberts (returning from the South African war).

As the Jan Breydel drew alongside the Admiralty pier Sir Douglas Haig was seen on the bridge, standing next to Vice-admiral Sir Roger Keyes (who directed the Zeebrugge raid), and surrounded by his generals.

Guards of honour of the seamen from the montors and of the Royal Marine Light Infantry, with bands, were mounted.

The farmers on the hills on the eastern side of Tokomairiro Plain, have, on the recommendation of Inspector M'Leod (Mosgiel), decided to adopt a systematic and united campaign for the destruction of rabbits.

The united action will be commenced next Wednesday, and the inspector will pay a visit around the various properties at the end of the current month to ensure that each farmer has done his share.