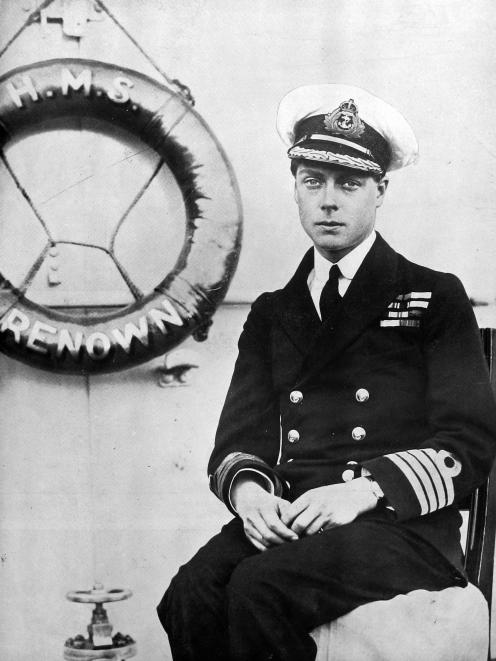 Edward, Prince of Wales on board HMS Renown for his tour of New Zealand. — Otago Witness 4.5.1920. COPIES OF PICTURE AVAILABLE FROM ODT FRONT OFFICE, LOWER STUART ST, OR WWW.OTAGOIMAGES.CO.NZ
Despite the heavy south-west wind which blew yesterday, accompanied as it was by cold rain showers, several thousand people journeyed to Saint Clair to view at first hand the damage which has been wrought there by the sea.

The well-known Ocean Drive is now but a memory, and the sea has eaten away a large part of the sandhills alongside which the drive was constructed. The seaward side of the sandhills now runs sheer up from the shore to a narrow ridge. Before the ocean commenced to make its present attack on the big sandhill at St Clair, the entrance to the narrow track which commenced just below the bathing sheds and led over the hill to the children’s playground behind the Forbury Park racecourse, led in from the Ocean Drive, which was about 20 ft wide here. Yesterday the drive was also completely eaten away at that particular point and the entrance to the track undermined. Realising that something would have to be done quickly, the City Corporation commenced its counter-offensive on Saturday morning and a start was made with the work of carting rocks and scrub to St Clair in an endeavour to stop the serious erosion which has been taking place. Mr M. Stevenson, the contractor, had 14 teams working during the morning and a larger number during the afternoon. The work was continued on Sunday until dark and will be proceeded with until an improvement has been effected. Stone is being brought from the Musselburgh quarry.

Speaking about poverty in Auckland, Sister Esther, a well-known social worker, quoted the case of a young mother, 34 years of age, with 9 children aged 13 years down to a few months, and the breadwinner earns £3 10s a week. Rent, that bugbear of the poor, takes 11s.6d, and with the pittance that is left this woman has to feed and clothe a household of 11. With blankets and mattresses at their present prices the poor cannot afford them, and some queer makeshifts have to be used. Already Sister Esther has fitted out 157 families with warm winter things. Rent hits the poor very hard and this leads to a lot of overcrowding. In one house of 6 rooms, for instance, there are two families, one of a father and mother and 7 children and the other family a mother and 4 children. Sister Esther mentioned a fact which shows what a struggle some of the poor have to scrape through. “Many of the men in large families that really cannot make both ends meet have not had a new suit of clothes since they were married,’’ she remarked.

A complaint is made to us that pilfering is being carried on very extensively by visitors to tea rooms and restaurants. “During the last two and a half months,” the proprietors of one restaurant write to us, “over 3 dozen teaspoons, one and three quarter dozen dessert spoons and a quantity of knives, forks, etc has been stolen from our tea and luncheon rooms. The fact that they have been taken in small quantities goes to show that the pilfering is carried out by a number of persons.’’