The local branch of the Returned Soldiers’ Association is to be congratulated upon entering into possession of the new club premises, the foundation stone of which was laid by General Birdwood in June of last year. The site of the new edifice, facing Moray Place and Burlington Street, is almost an historic one by virtue of the fact that the old club building, now demolished to make room for the new one, was for so many years quite a landmark as the residence of the late Dr Hocken. The new clubhouse is an architectural acquisition to the city, not unworthy of its proximity to the First Church of Otago, and though yet unfinished, makes an excellent impression in its external design. Members of the RSA can now regard it as their own premises, in which they may reasonably take a pride, and will lack nothing in the way of an adequate rallying centre for their social and other activities. The memorial aspect of the club now opened in Dunedin will always be in evidence in its title and within its halls will the memory of the fallen be oft recalled and honoured. 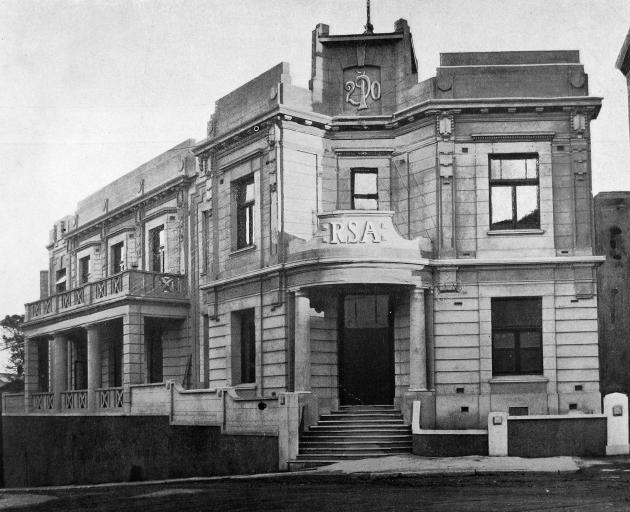 The Dunedin Returned Services Association (RSA) building, Moray Pl/Burlington St corner. - Otago Witness 29.07.1921
Patrons of the movies — and there are many of them in Dunedin — will be interested to learn that Dunedin has been selected by a new producing company as the place where will be filmed all the interior scenes in a six- part dominion production, the scenario for which is almost completed. The picture, which will be called “The Birth of New Zealand”, is to be the first release of “The Birth of New Zealand Picture Producing Company”, a newly-formed syndicate with headquarters at Palmerston North, where the original capital has been subscribed. Two of the principals, Messrs Wallingford Tate and Harrington Reynolds, are in Dunedin at present, staying at Wains Hotel, in search of authentic material for the reconstruction of gold field days. The outdoor scenes will be taken at Dargaville, for the sake of sunshine and warmth, many of the scenes necessitating the appearance of Maori parties in the scanty costumes of olden days. Dunedin has been selected for the studio site because of the existence here of valuable records in the Early Settlers’ Museum and the Hocken Library, and because it is the only town in New Zealand with an electric service of sufficient voltage to run the brilliant lights used in modern picture production. The producers hope to secure the use of the Early Settlers’ Hall as a studio.

A national demonstration and celebration of Empire Day was held in the evening in the Octagon Theatre, under the auspices of the Dunedin branch of the Overseas Club. The building was well filled, and the proceedings were of an enthusiastic and thoroughly enjoyable nature.The President of the club (Mr A.E. Isherwood) presided over the introductory portion of the meeting and extended a very cordial welcome to those present. It was very fitting, he said, that May 24 should be Empire Day, as on that day in the year 1819 Queen Victoria was born, and her ascent to the throne in 1837 marked the beginning of a period and the development of our Imperial mission. During Queen Victoria’s reign of 64 years the Empire expanded in a most remarkable way. The British flag was firmly planted and maintained in the remotest parts of the Earth.
(Applause).  — ODT, 25.5.1921.