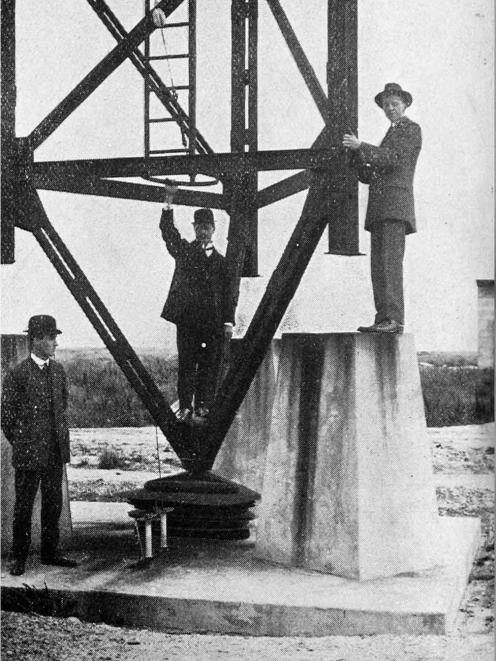 At the foot of the new Awarua Plains wireless station mast, Southland. The steel structure rises to a height of over 400 feet and weighs over 150 tons. — Otago Witness, 28.9.1920. COPIES OF PICTURE AVAILABLE FROM ODT FRONT OFFICE, LOWER STUART ST, OR WWW.OTAGOIMAGES.CO.NZ
The statements made by the Rev V.G.B. King in the annual report of the Men’s Mission, which he controls, and at the annual meeting of the mission as to the serious increase of immorality in this community have naturally excited considerable comment of a widely varied character. On Friday the views were published of several social workers who held that Mr King had exaggerated his case, and who while admitting the prevalence of moral laxity, were disinclined to believe that it had recently shown any noticeable increase. “I quite realise,” said Mr King, “that in comparison with other places Dunedin undoubtedly holds pride of place in regard to moral tone, but I hold most infinitely to the statement that immorality is greatly on the increase.” This was borne out by the fact that cases of a depraved type of immorality with which he had not previously had to deal were now being brought under his notice. He was using the term immorality in a wide sense and including under it unisexual vice. So serious has the position become in regard to the matter that a meeting of clergymen of various denominations, and headmasters from some of the public schools was recently held with a view to taking steps to combat this form of immorality. In further support of his position Mr King pointed out that according to a report recently presented to the House by the Minister of Public Health there were at present 65 cases undergoing treatment for venereal trouble at the Dunedin Hospital.

The General Committee of the Dunedin City Council reports that in view of the fact that the Harbour Board is definitely opposed to the continued use of the foreshore for refuse tipping purposes, the committee has for a considerable period been endeavouring to secure other sites which might be conveniently used for tipping. A proposal in which considerable progress has been made, for railing the refuse to the Green Island swamp, had to be abandoned owing to the Railway Department withholding its consent for the necessary sidings. The site which it is now proposed to use is Chisholm Park, in which there is a considerable area of land admirably adapted for reclaiming by means of city refuse.

A New Zealand journalist now travelling in Canada says: “Although the fact that early French settlement has left its mark on the population of Canada is well known, one experiences some surprise when brought into direct contact with the people of cities like Montreal and Quebec where a very large proportion of the population cannot speak English. Of the two million people in the province of Quebec, three-fourths are of French origin. British immigration is neutralised by the rapid natural increase of the Canadian French, who usually have large families. Roman Catholics form 39.31% of the total population of Canada, and noble cathedrals in Montreal in Quebec testify to the devotion of the people. Nevertheless, the French-Canadian did not manifest any enthusiastic disposition to assist France in the war. Recruiting among the French population was meagre, and the law of conscription was put into operation largely with the object of making this section of the Canadian people bear its fair share of the national burden. It may be said, however, that, generally speaking, the French Canadians are loyal to the Government of the dominion. They take a full share in its administration and realise the advantages which its liberal constitution assures to them.”

Mr Henry Hart, of Lawrence, has offered to donate to the Gardens one each of his splendid collection of native veronicas. As Mr Hart’s collection consists of at least 100 species, and is probably the most complete in the dominion, the gift is a very welcome one, and has been acknowledged by the Reserves Committee on behalf of the Dunedin City Council, with thanks.