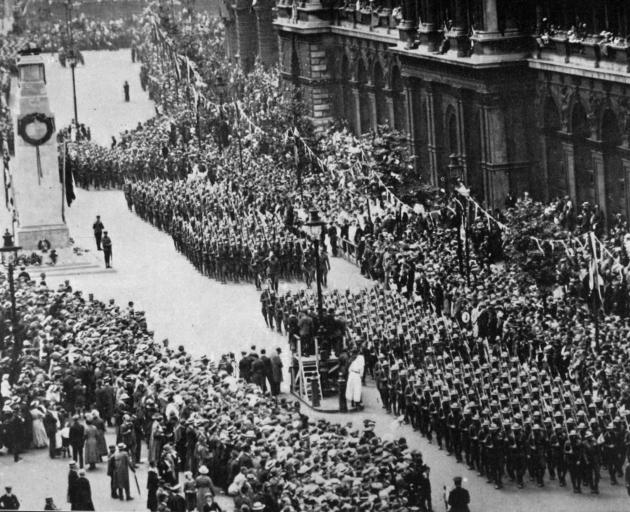 Looking down Whitehall, London, as American troops pass the memorial to the fallen during the great Victory March on Peace Day. - Otago Witness, 30.9.1919.
New regulations have been gazetted ''for the organisation, examination, and inspection of public school and syllabus of instruction.''

The time spent in the senior division will for the average boy or girl be two years. The classification of a school is to be made at the discretion of the head teacher, who may arrange his pupils in different classes for different subjects according to ability and proficiency.

Pupils shall for all purposes of record, but not necessarily of teaching, be classified according to their capacity and attainment in English. The teacher must hold periodical examinations of the classes and the annual examination, which must be held in November or December, and the regulations prescribe the maximum number of marks to be gained by the pupils in the several subjects.

The subjects of instruction in the various classes will be grouped under the general headings of: English - which will include oral expression and written expression; the former covering speech-training, reading, recitation, and singing, and the latter writing, spelling, composition, and grammar.

''Graphic'' expression - including drawing and handwork; Arithmetic; Man and Nature including nature-study, geography, elementary science, and home science; Man and Society - including history, civics, and moral instruction; Physical training - including physical exercises, swimming, and lessons on hygiene and health.

Sir, I note in your issue of the 23rd inst. that a meeting of members of Parliament last week considered whether representations should not be made to the Government to increase the honorarium to 500 a year.

It is incomprehensible that our members should contemplate such a thing as to raise their own emolument, when they know full well that the claimants under the Old-age Pension Act are verily on the brink of destitution. For their strenuous duties these self-same representatives receive 300 with free railway ticket, or equal to 2 per day.

The allowance to the old-age pensioner is 15s per week. The fact speaks for itself in these days of high-priced living.

London: Dr H. M. Vernon has reported on a series of experiments, lasting several weeks, on the effect of alcohol on the speed and accuracy of workers. The work chosen for test purposes was typewriting, the use of the adding machine, and pricking a spot on a target set up vertically at arm's length.

The effect of taking alcohol with food and upon an empty stomach and also the effect of pure and diluted doses were studied.

Experiments were made upon eight men and five women altogether, and ''all of them,'' Dr Vernon says, ''with one doubtful exception, showed some reaction to the very moderate doses of alcohol and alcoholic liquids employed.''