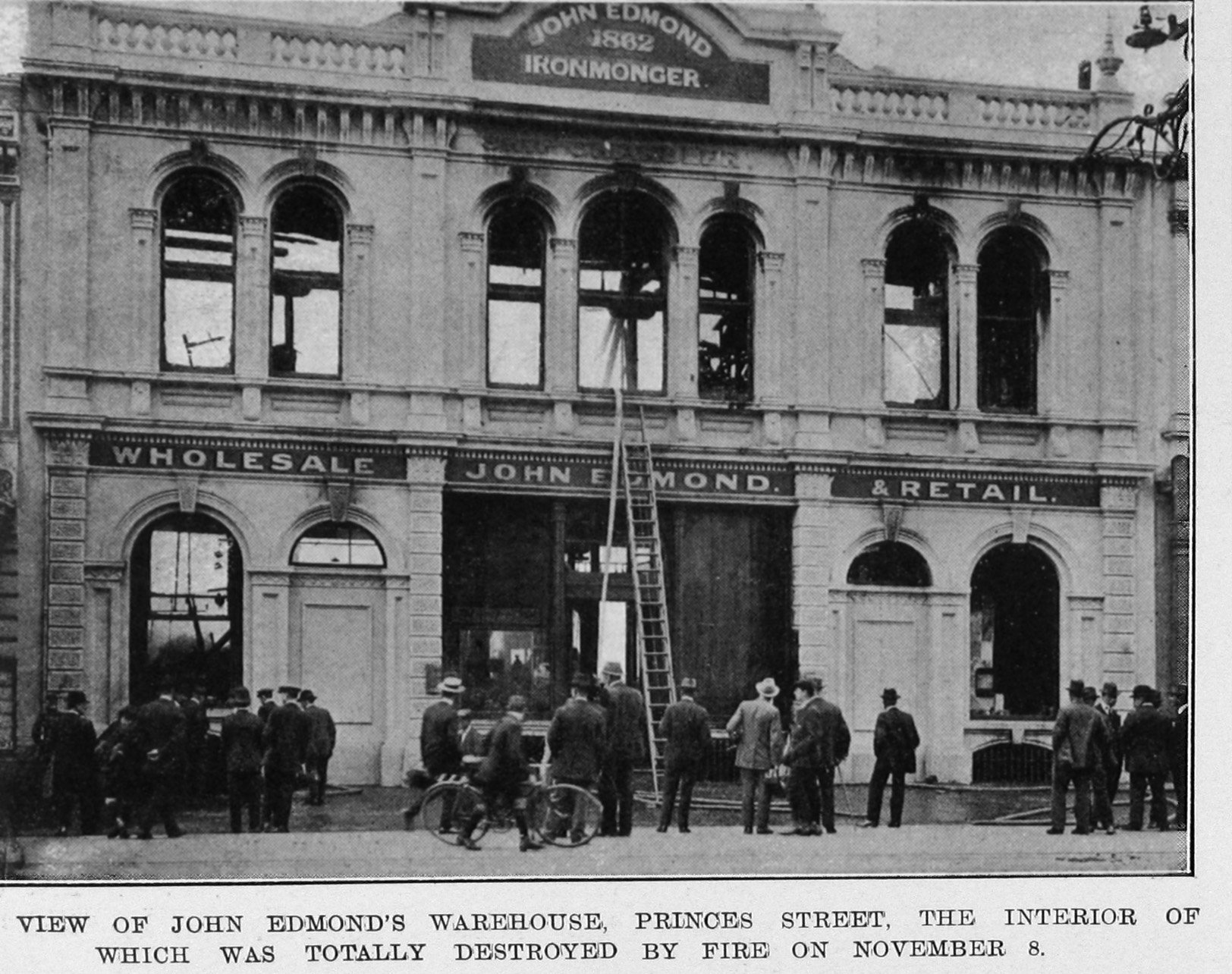 The frontage of John Edmond's warehouse, the interior of which was destroyed by fire on November 8. - Otago Witness, 14.11.1917COPIES OF PICTURE AVAILABLE FROM ODT FRONT OFFICE, LOWER STUART ST, OR WWW.OTAGOIMAGES.CO.NZ
"Discharged soldiers" are words that often meet the eye at the present time, but probably the general public do not realise how far these men have entered into our institutions in civic life.

During a talk with one of the Technical School authorities yesterday, a member of our staff learned that, within the last six months, 28 or 30 discharged soldiers have been receiving regular tuition at the school or in workshops under the direction of the school authorities. The demand has been principally for tuition in wool-sorting, motor engineering, and commercial training, and several of the men who have devoted some months to acquiring a knowledge of the wool business have been fortunate enough to secure good positions in the country for the shearing season now about to open. Of the men trained in motor mechanics in garages, a number have taken positions either in garages or as drivers of cars, while two or three of the commercial men have situations in view.

In accordance with notice of motion at the Dunedin City Council meeting, Cr Bradley moved - ``(a) That all the corporation employees' pay be raised to a living wage, and that no married man shall receive less than 3 for a week's work consisting of six days; (b) that all married men receiving 3 5s per week and under shall receive a war bonus of 5 per cent on his wages for each child under 14 years; (c) that no employee, either male or female, over 18 years shall receive less than 20s per week.'' Cr Bradley was granted leave to add the words to the beginning of the motion ``that it be a recommendation to the Finance Committee''. In speaking briefly to the question, he said the motion spoke for itself. He thought the time had now arrived when some steps should be taken to place married men on a better footing as regards pay. He thought every councillor recognised the necessity of an increase being granted in the direction he had indicated, and that every councillor was prepared to see a living wage paid to the council's employees.

For some time a number of islands in the Waitaki River have been vested in a local committee which, under the jurisdiction of the Otago Land Board, has dealt with the grazing rights. Yesterday an application was made by Mr Pelvin, through his representative (Mr Middleton), to have the control of these islands taken from the committee, and the grazing rights of an area which, he stated, lay into his small holding on the Canterbury side of the river, let to him. The board decided to confer with the committee before doing anything, and to that end it proposed to visit the place some time before next meeting and go thoroughly into the question.

Although the school holidays are yet at least a month distant, it seems that, owing to the desire to utilise the services of lads during the shearing season, a number of boys will probably be leaving school next week for work in the country, and week by week more will follow. The Director of the Technical School has a number of boys going to stations at Gladbrook, Omarama, Matakanui, and farms in different parts of Otago. This is in accord with a decision of the board, which does not intend to prolong the holidays.- ODT, 15.11.1917.