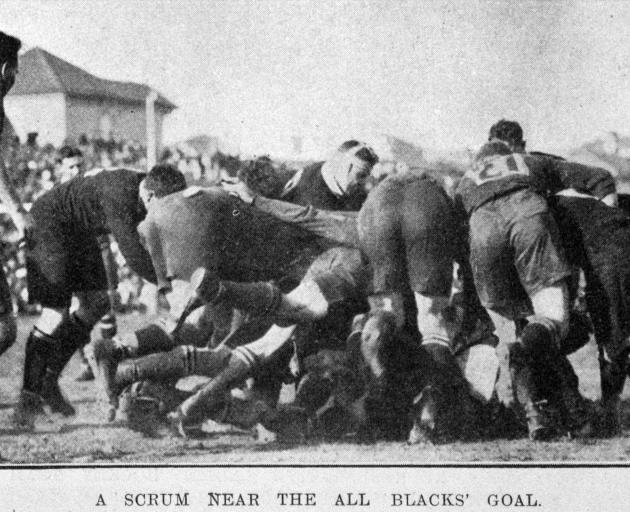 A scrum near the All Blacks' goal during the second test against the Springboks on August 27, 1921. — Otago Witness, 6.9.1921.
The second test match was contested between teams which were just about equal, and because G. Merkel’s great kicking abilities were responsible for a potted goal, which put on 4 points, no-one will grudge the Springboks their victory by 9 points to 5.

There was an air of expectancy about the great crowd which began to assemble at an early hour this morning at Eden Park.

This was entirely lacking from the Auckland-Springboks match the previous week, for a test contest creates an atmosphere all its own.

There is a tension and excitement about it which is naturally lacking from an interprovincial clash, for there is far more at stake. A few, and I am glad to say a very few, super- sensitive persons said unkind things about the reception given to the South Africans when they played the Auckland representatives last Saturday, but a more sporting crowd I have never seen.

The non-playing members of the South African party on that occasion were loudly cheered when they took their seats in front of the grandstand, and while naturally any brilliant work by the local representatives was loudly cheered, the finished exhibition of the visitors came in for its share of praise.

London, August 26: Mr Massey has been very busy during the last few days, and the rest on the return voyage will be beneficial, though his health generally is robust. As usual, Mr

Massey’s departure was the occasion for many requests from leading papers and agencies for final interviews and messages of farewell.

The Times published prominently a two-column interview and an editorial appreciation in emphatic and eloquent terms. The unanimity of the press generally in regard to the value of the services of Mr Massey to the Empire has been an exceptional experience in connection with the visit of overseas statesmen. The Daily Telegraph today, referring to Mr Massey’s departure, says that the Empire owes much to the statesmen from overseas, who guided and informed the conference in its deliberations. Mr Massey himself has played as influential a part as any of his colleagues in the events of the last few years.

London, August 25: Mr Massey, interviewed at Euston station, deeply deplored the airship disaster, which, he said, was a terrible blow, and would throw the development of commercial airships back many years.

‘‘We wanted to prove by a trans- Atlantic flight of R38 that the idea was practicable. We have now got to face things as they are, and that means a long setback; but I am convinced that the airships of the future will prove a sound commercial proposition.”

August 27: Early this morning Constable Dorgan was shot dead while in the execution of his duty. It appears that at 1.30am Constables Christopher and Dorgan, while on duty in Stafford street, discovered that the premises of T and J Thomson were being entered by burglars. Constable Dorgan decided to watch the premises while Constable Christopher sent for the proprietor. Dorgan evidently went into the right-of-way at the back, for when Christopher. returned he found him lying in the back yard, having been shot. The victim died within five minutes.