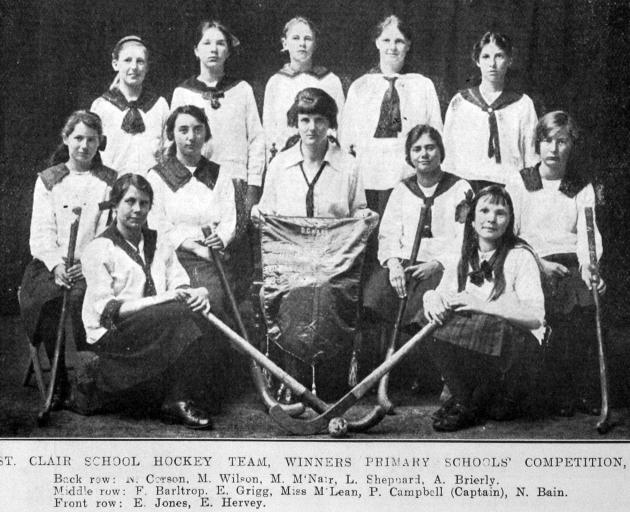 The monthly meeting of the St Clair School Committee was held on Friday evening last, Mr P.J. Priest (chairman) presiding.
It was reported that the school team had won the B Grade football competition, with 11 wins and 2 draws, and the girls’ hockey team succeeded in winning the banner again this year.

The committee decided that photographs of both teams be taken, and that each of the scholars who competed be presented with a copy.

Wellington: The annual report of the Public Trust Office for the year ended March 31, 1921 says with the fall in the value of wool and other staple products, the farmers have found great difficulty in many cases in finding money for the payment of interest due under their mortgage, and a great deal of additional work has been cast on the Public Trust Office in dealing with these cases.

The Public Trustee is in a peculiar position in this matter. On the one hand mortgagors ask for time in which to pay interest, and on the other clients require the prompt payment of their interest. It has not always been possible to grant the concessions which mortgagors require, nevertheless the office has endeavored to deal with each individual case in as liberal a manner as is consistent with its duties as a Trustee.

Recognising the difficulties of the time, the office has endeavored to avoid any action which would serve to accentuate the existing stringency. It will be realised that, with investments totalling £13 million in value, this matter has required very careful attention, and a failure to deal with it firmly might easily have created a dangerous position.

While the office has very great liabilities to clients which it is bound to meet, it has nevertheless carefully refrained from any harsh action against mortgagors.

An evidence was seen yesterday afternoon of the zeal of children attending the public primary schools, and of the ready response made by parents to the call made to assist those who are unfortunately out of employment. Goods of various kinds were being deposited at the room in the old Post Office Buildings.

Express wagons  drew up and unloaded an enormous collection of vegetables, pot plants, fruits, jams, pickles, and eggs, the feature of the collection being eggs.

At 4:30pm the goods which will be offered in the streets today were still pouring in, and as the public is not unresponsive when there is a call for help, the sum that will result from this voluntary effort ought to be substantial and be one means of relieving a real distress that exist in some cases. It is not a case of charity; it is merely a case of coming to the assistance of those who need it, and who are entitled to receive it.

A robbery took place at the suburban branch of a local bank on Tuesday morning. It appears that a young man went into the banking chamber and was given permission to use the telephone, which is situated in close proximity to a desk where money to be transferred to the bank in the city is counted.
When the money was brought as usual to the city it was found that the sum of £200 was missing. Suspicion rests on the young man who used the telephone, as while he was doing so the clerk’s attention was diverted from the desk for a short space of time, and in the interval the user of the telephone disappeared.