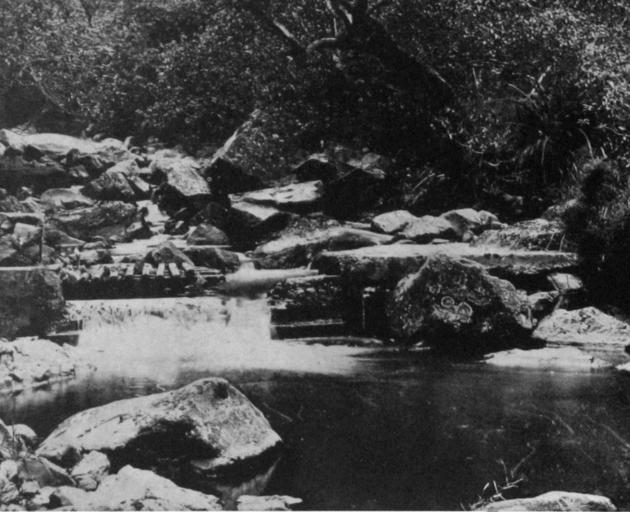 On the Upper Leith: the emergency intake near Morrison's Creek. - Otago Witness, 19.3.1919.
One form in which St. Patrick's Day is honoured is by holding a concert, and that form was followed last night, when a programme of music was presented in His Majesty's Theatre.

The only difference between this and previous occasions was that the concert, in place of being held under the auspices of the Hibernian Society, as formerly, was now held under the patronage of the Catholic Federation, a body that has sprung into existence comparatively recently. The attendance was very large, the theatre being filled in all parts, and the pecuniary object of the concert - to add to a fund for the erection of new dwellings for the Christian Brothers - was attained to a material degree. The audience was most appreciative, and missed no opportunity of displaying its true feelings. The concert was appropriately opened with a selection of Irish airs, played by the Kaikorai Band, under the direction of Mr Helmer Davie, which met with most favourable recognition. Some of the singers who followed the band selection are not heard in Dunedin as frequently as formerly, and with pleasant recollections of the past, and a full recognition of their qualifications as vocalists, these were heartily welcomed before they had sung a note. One of these is Mrs R. A. Power, who sang "Kathleen Mavourneen'' to the complete satisfaction of the audience. Another is Mr T. J. Hussey, who has many a time delighted audiences with his singing. Mr Hussey sang "God Save All Here'', and like Mrs Power, had to submit to a recall.

A Press Association message from Wellington states that many of the old hutments at Trentham are being converted into hospital wards linked by corridors to accommodate about 700 soldiers, who will require orthopaedic treatment on their return to New Zealand. Vocational and occupational training will be an important feature. Apart from structural alterations the chief new work being done is lavatory provision. All the work, which, it is expected, will be completed by the middle of next month, is being done by the Army Ordinance Department. Military surgeons and other experts specially trained in orthopaedics are now arriving in New Zealand.

Two young men in Wanganui who have for some time taken a keen interest in the development of various types of aircraft, are now engaged in constructing a monoplane. The specifications were procured from America, but the whole of the work of construction is being carried out locally. The spread of the plane is 18ft, the wing chord 5ft. The total length of the machine is 16ft. Oregon pine timber has been used throughout in the construction of the frame, and, without the engine, the machine will weigh 180lb. A twin-cylinder 12 horse-power engine, calculated to develop 1200 r.p.m., is to be the motive force.

LONDON: The Allies have arranged to send the Germans 370,000 tons of wheat, meat, and condensed milk monthly, and will allow them to fish in the Baltic Sea. A hundred thousand tons of potatoes will be forwarded immediately for the use of the occupied territories. Admiral Wemyss has reported from Brussels that the surrender of the German ships was acquiesced in without discussion, the proceedings being a most concise and frigid character. - ODT, 18.3.1919.