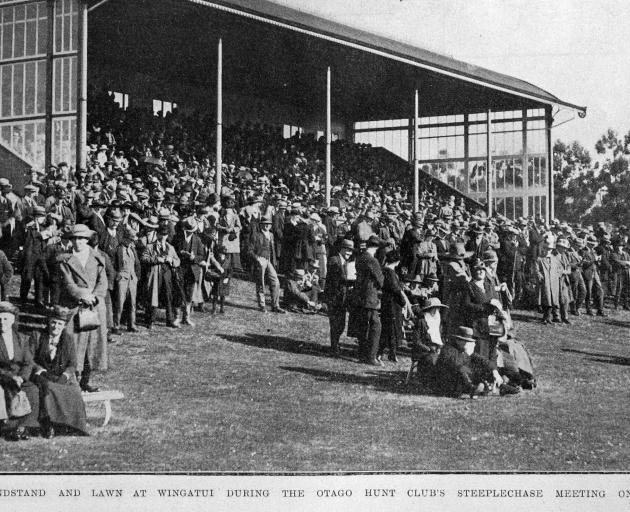 The grandstand and lawn at Wingatui during the Otago Hunt Club's steeplechase meeting on September 10, 1921. — Otago Witness, 20.9.1921
The Otago Hunt Club was unlucky in the fact that rain set in in the forenoon, and no doubt the threatening weather was responsible for keeping many people away from Wingatui on Saturday afternoon.

Despite the uninviting morning, however, there was an excellent attendance, and patrons were rewarded for their courage by not only seeing some interesting racing, but they also had the pleasure of enjoying it under a bright sun, which made the afternoon quite warm and summerlike. Some fair-sized fields were seen out, but the cross-country horses were rather a poor lot. Mr W. Rudkin made his debut as a starter of gallopers, and on the whole acquitted himself fairly well. The track was in excellent order, and the card was got off without serious injury to any of the riders who lost their seats in the saddle.

Among the papers read before the meeting of the British Medical Association in July, not the least astonishing in some respects was that in which Dr Edgar L. Collis discussed the importance of industrial medicine to the community. There are people who believe that the way to health consists in the avoidance of medicine, in the popular connotation of this term, and there is something to be said for the viewpoint, but Dr Collis has not proposed that the workers of the old country shall become wholesale consumers of drugs, very nice though that might be for the prescribing practitioners. What he is aiming at is the raising of the standard of industrial health, claiming, as he does, that thereby a saving representing an enormous sum of money could be effected every year.

He emphasises the immense possibilities that might attend the introduction of a more abundant measure of fresh air, sunlight, cleanliness, and wholesome food into the life of the worker, and he urges that the standard set in these matters by those who control industry would spread from the factory to the home.

He submits that as a result of medical supervision of entrants  to industry and of hygienic conditions of employment, an immense saving can be effected, and that this may be supplemented by another saving of great magnitude on lost time.

It would seem that it has, after all, been left to the kinema to threaten seriously the Englishman's reputation for sobriety and decorum. Marvellous as it may appear, the sensation of the moment, described at some length by cable for the benefit of all parts of the Empire —  the most important event of the weekend — is the arrival in London of Mr Charles Chaplin. It is an extraordinary story that reaches us and no doubt we are grateful for it.

The progress of princes, presidents, great potentates, preachers, statesman, and warriors has been almost as nothing to this. The reception accorded to the Prime Ministers from the dominions was feeble in comparison. The return of the Prince of Wales to London from his tour of the dominions was hardly more tumultuously welcomed.

Particulars of the Chaplin diet, and details of the Chaplin habiliments, even to the headgear, are not spared us. The wonderful resourcefulness of the metropolitan police must have been heavily taxed in their handling of the enormous crowds . 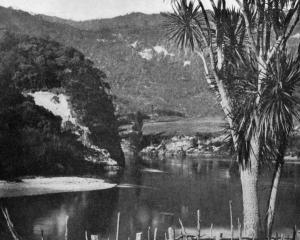 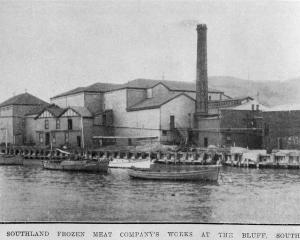