Trees can be seen for the wood 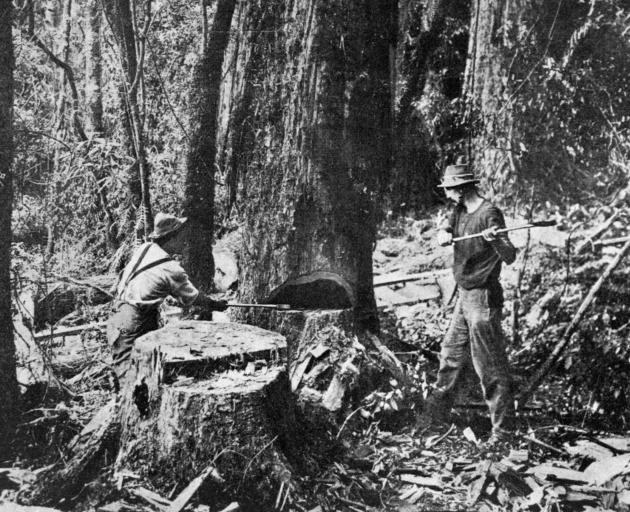 Tree fellers in a kauri forest, North Auckland. — Otago Witness, 27.12.1921
From our London correspondent: At the request of the Imperial Institute Committee for New Zealand, the advisory committee on timbers of the Imperial Institute has inquired into certain matters relating to New Zealand timbers. The report on "the possibility of increasing the use of kauri pine in this country" seems to be somewhat belated, as it bears the date 1917. In view of the present limitation of the kauri supply it seems a somewhat futile inquiry. However, in summing up the committee states that it is agreed that the use of kauri in this country could be largely extended, but the controlling factor must always be that of price, especially in relation to that of certain cheap hardwoods, notably West African mahogany, which are often used in competition with kauri.

Some impressions of his visit to New Zealand have been related in the London Evening News by Viscount Northcliffe. It refers particularly to the prospects offered by the dominion to settlers, and though his visit lasted only a week, the facts he gives "have been checked by New Zealanders well acquainted with the whole of their wonderful country."

"If I were a young man of agricultural bent and training, with the Scots industry and adaptability for settlement," Lord Northcliffe writes, "I would take my knowledge of the dairy farm to New Zealand, leaving my capital, if I had any, behind me at home, to await the time when I could use it to advantage. Let me say at once that New Zealand does not want the kind of man that we don't want. As usual, round men are going out to fill square holes. People are leaving London for New Zealand who would be unhappy even in a change to Liverpool, and bored stiff, besides being hopelessly useless on a farm in Perthshire," Lord Northcliffe said. "Sharemilkers, if they are thrifty, can soon own their own farms, whether through the elastic system of mortgage that pertains in New Zealand, or by capital from home, or by saving. Sharemilkers are of all types. Most of those that I met were New Zealand-born. Every one was of British stock; and let it be remembered (and may it always be maintained) 98 percent of the population is British. New Zealand is not a paradise, and it has its troubles, labour difficulties, and even a handful of noisy Reds. New Zealand needs more railways, more roads, but above all it needs more people. For the parent who is deciding a son's future or the son who is discussing what his parents should do for him, I suggest that tea planting in Assam, orange growing in Florida, fruit growing in British Columbia, are speculations compared to the opportunity of becoming a landowner at 30 years of age in New Zealand. People who ought not to go a-dairying are delicate youths sent abroad for their health, men unacquainted with country life, and farmers too advanced in years. — ODT, 30.12.1921.

Reds! So noisy, they shot one in Waihi.